The plot of The Scent of Rain & Lightning is simple: when convicted murderer Billy Croyle (Brad Carter) finds his sentence commuted, the young woman whose parents were his victims, Jody Linder (Maika Monroe), goes on a voyage of self-discovery to learn the truth about what happened to them several years ago, when she was only a child. The details within this plot are more complex, though, and the way they’re revealed in flashback make this film a compelling and entertaining mystery.

The movie opens with Jody’s grandfather, Senior (Will Patton), and other family members, carefully telling her the news about Billy’s release. She’s obviously distraught, but one of the first things she does is visit Billy. The Scent of Rain & Lightning is subtle, particularly in defining Jody’s motives for wanting to ask questions about the original investigation. I missed a specific explanation for “why now?” but assume the timing was the catalyst. There may also have been something during her encounter with Billy that convinced her he was really innocent.

The present-day narrative becomes merely a thin structure upon which the meat of the movie hangs. What happened in the past is definitely the main event. A short scene of Jody asking someone a question is followed by a lengthier scene, or set of scenes, that took place in the past. I found myself feeling interrupted when grown-up Jody reappeared to pull us from the story that was building. However, the emotional performance of Monroe (The Guest, It Follows) saves this small complaint from becoming a full-fledged criticism.

The Scent of Rain & Lightning was written by Jeff Robinson and Casey Twenter, based on the New York Times best-selling book by Kansas City native, and award-winning crime novelist, Nancy Pickard. It’s been a long time since I’ve read a good, old fashioned murder mystery, but the movie version contains familiar elements such as multiple suspects, red herrings and the fact that the entire thing revolves around one question: did anyone see Jody’s mother, Laurie (Maggie Grace) wear Billy’s hat out of a bar? 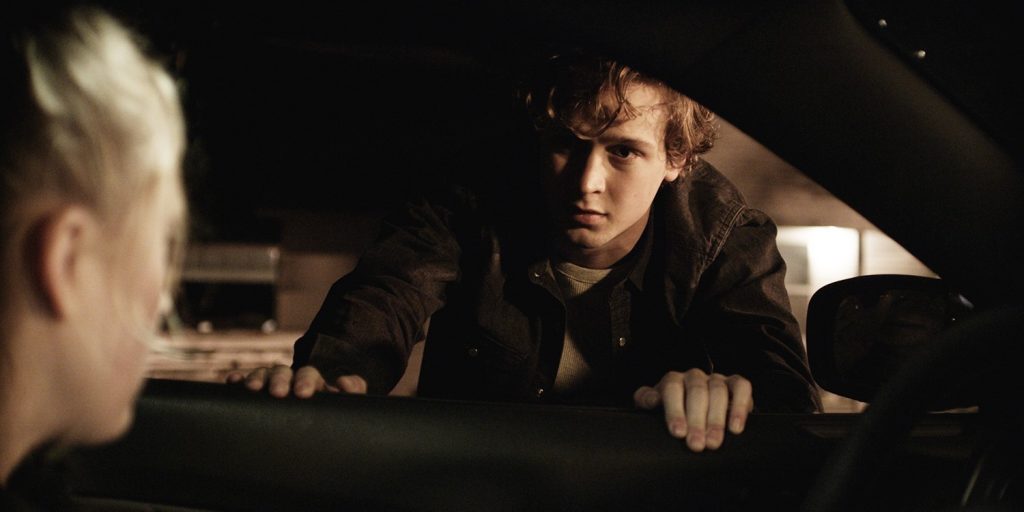 Somehow, though, the movie doesn’t feel like a mystery. The characters, drama and relationships manage to be the focus. Sometimes in mysteries, the characters are used only as plot devices. Here, they’re much more than that. Although modern day Jody does not appear as often as young Jody (Meg Crosbie), I’m invested in what happens to her. In this way, plus the fact that it has a modern “Western” setting, it reminds me very much of Hell or High Water. That’s a good thing; we can use more movies like that.

When it comes, the climax has a unique Gothic feel to it. It unfolds during a storm; hence, the title. However, this is one of the loudest, most unnerving storms I’ve witnessed on screen. Have you ever been standing outside during a thunderstorm? The sound is different from the sound you hear within the safety of your home; it rattles the bones. This is the sound in the climax of The Scent of Rain & Lightning. With the power out and flashes of light illuminating the scene, the true identity of the killer is revealed. It’s a well-crafted and effective conclusion.

The film was directed by Blake Robbins, a familiar face from the other side of the camera: he appeared on Oz as Officer Dave Brass and on The Office as Tom Halpert. He shows skill and talent as a director. It’s a polished project with an intimate feel elicited, in part, by occasional use of a hand-held camera. The ensemble cast includes veterans like Justin Chatwin, Logan Miller and Bonnie Bedelia, each making an important contribution to the story, creating real people instead of just characters.

Following screenings in Atlanta and Cleveland, The Scent of Rain & Lightning makes its Missouri debut as part of KCFF (Kansas City FilmFest), showing Friday, April 7 at 7:00 and Sunday, April 9 at 3:45 at Cinemark Palace on the Plaza. For tickets, visit kcfilmfest.org. I recommend you make an effort to see it.