56
SHARES
ShareTweet
Acclaimed filmmaker Karen Skloss (SXSW premiere Sunshine) world premieres her new psychedelic teen horror film THE HONOR FARM at this year’s SXSW.
THE HONOR FARM centers around Lucy’s prom and how it falls apart. she finds herself jumping into a hearse headed for a psychedelic party in the woods. Looking for a thrill, the party wanders deeper into the forest, to a haunted and abandoned prison work farm. A secret wish and a summoning of the dead sends the group on a mind-bending trip into a dangerous trap.
THE HONOR FARM takes the most beloved youth genres – rebellious coming of age, 80’s teen comedies, horror – and blends them all together in surreal and entertaining ways to tell a story of one young woman’s passage to adulthood. Picking up where Pretty in Pink left off, while taking notes from Heathers and River’s Edge, THE HONOR FARM is a movie about taking the familiar from a canted angle and making it new and fresh to behold.

Featuring Olivia Applegate (NBC’s Revolution, upcoming in Terrence Malick’s Weightless), and made by a shining Austin-based filmmaking team – including director Skloss, producer David Hartstein, co-producer Jason Wehling, and executive producer Louis Black. Check out the clip below along with a few stills. 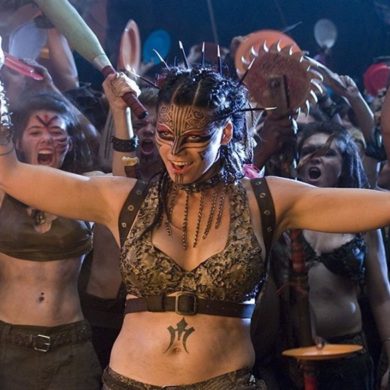