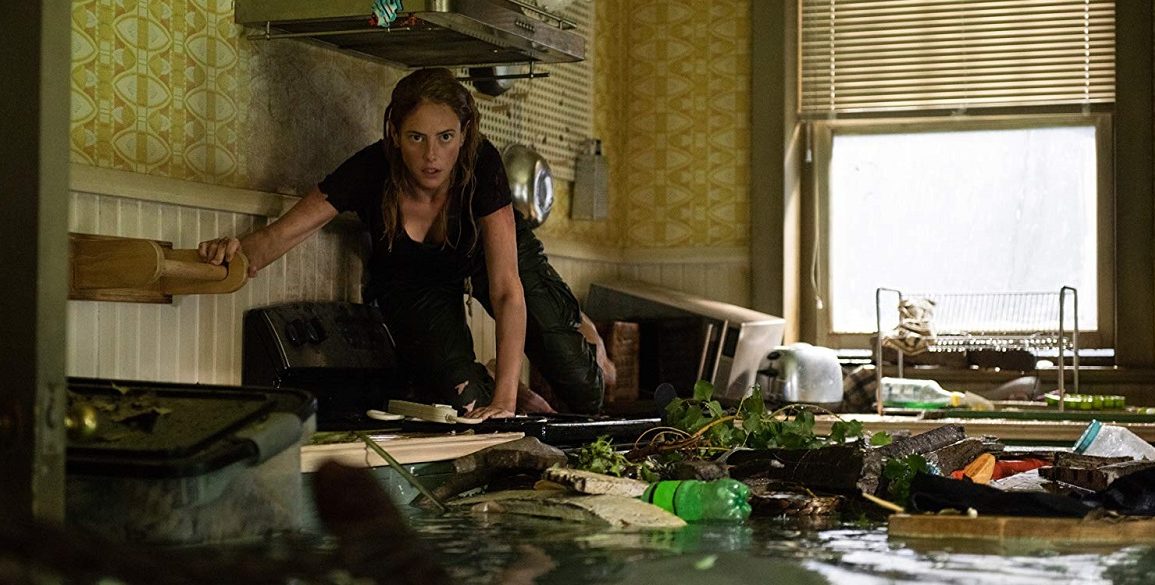 Sometime a short logline sells a movie. Both in pitch form or casually describing it to the average passerby. Stop anyone on the street and say “Horror movie + Florida + Hurricane + Alligators” and they’re likely to toss buckets of money at you. That’s simply how the world works. Thankfully, today we have a trailer for Alexandre Aja’s latest film, Crawl, which happens to be about just that. See for yourself.

Goodness. This is a movie that looks absolutely ridiculous, but in the best way possible. It gives you everything you could possibly want in a home invasion creature feature, while wanting you to watch the rest of the film immediately. That’s rather impressive. It immediately calls to mind a couple other films somewhat similar in concept. The Shallows proved in 2016 there’s money to be made theatrically, by pitting someone against a deadly water-based predator. Back in 2010, there was the underrated Burning Bright. That one dealt with two people trapped inside a house, with a tiger, during a hurricane. These films basically write themselves. Which is why having a director, like Aja, who knows how to throw blood at the screen, while getting under people’s skin, is the best thing here. I mean, he did both Piranha 3D and High Tension. This appears to be somewhere between those two and cause for much excitement.

Here’s the official synopsis, if that floats your boat:

“When a massive hurricane hits her Florida hometown, Haley (Kayla Scodelario) ignores evacuation orders to search for her missing father (Barry Pepper). Finding him gravely injured in the crawl space of their family home, the two become trapped by quickly encroaching floodwaters. As time runs out to escape the strengthening storm, Haley and her father discover that the rising water level is the least of their fears.”

Now, if there’s one thing to fear, it’s giant alligators coming for you. They’ve been around for millions of years and generally don’t really seem to care for humans invading on their space. It’s a reason people have problems with Florida. Although, the combination of alligators and hurricanes is sure to give most people pause. Crawl is also coming out in the best year possible, as 2019 marks the 20th anniversary for both Lake Placid and Deep Blue Sea. In a perfect world, theaters would be working overtime to book a double feature of this film, with either of those. Don’t be surprised if your local rep theater or Alamo Drafthouse are wise enough to pull the trigger. The stars so rarely align in this fashion.

What do you all think? Is this film up your alley? Are you tremendously scared of alligators or Barry Pepper, for that matter? In your opinion what’s the best horror movie set in water? Share your thoughts down in the comments. Crawl swims into theaters on July 12, right in the heart of the summer. To tide you over till then, here’s the movie’s first poster. It’s rather fantastic, entirely on its own.