For those familiar with Neil Gaiman’s book, American Gods, you have been waiting for the series launch of this since they first announce it would be adapted. For those unfamiliar with the source material, it tells the story of a recently released ex-convict named Shadow (Ricky Whittle) meets a mysterious man who calls himself “Wednesday” (Ian McShane) and who knows more than he first seems to about Shadow’s life and past.

Fans and media were treated to the World Premiere at SXSW, and it did not disappoint. With stunning visuals, mysterious characters and meticulous detail, Starz’s American Gods is primed to be a breakout hit.

Showrunner Bryan Fuller is no stranger to bringing us larger than life characters to the big screen and most recently with Hannibal. His winning streak continues with another TV adaptation.

The opening scene is bloody and epic setting the tone for the rest of the pilot that included a dark combination of comedic timing, drama and on occasional a blood bath that would have Mad Sweeney brimming with happiness through his blood soaked teeth.

The dreamlike sequences experienced by Shadow blend fantasy with reality which is sometimes hard to distinguish in the premiere. Not that it is a knock on the story, it’s intended to be there and works very effectively in doing so.

Ian McShane who portrays Wednesday has an Al Pancino-esque Devil’s Advocate quality about him but he elevates the character more than Pacino could. He’s all seeing, all knowing and lies, cheats and steals to get his way. Yet you can’t help but like his charm, wit and sense of humor.

But he can’t be the successful man he is today without a little help from his buddies. That’s when we see the introduction of “The Leprechaun” aka Mad Sweeney (Pablo Schreiber). His trademark signature coin tricks and sheer brute mentality make him a force to be reckoned  with both mentally and psychical.  Will to fight at the drop of a hat, or coin in this matter he doesn’t subscribe to a flight or fight mentality. I will give you two guesses as to which one he picks and the first one doesn’t count. One of the trademark frames from the pilot would have to be Mad Sweeney taking punch after punch and loving every minute of it has blood drips down his chiseled face and stains his white teeth.

Pablo Schreiber‘s is the ying to the yang of Shadow who is a much more sophisticated man who would rather reason than get into an all out brawl. That being said he can hold his own.

He had this to say about his character;
“Mad Sweeney’s arch is like Shadows. They are both looking for themselves”

The beauty of American God’s debut effort is the balance in both dialogue and character studies. While the introductions of characters jumps around slightly nothing feels out of place and when it does it only adds mystery and foreshadowing of what’s to come.

From it’s blazing buffalo acid trip dreams to the brutality of it’s characters both in state of mind and psychically, American Gods will be can’t miss TV. The series features a fantastic cast of characters and the pilot barely begins to scratch the surface of what’s to come.

To quote Ian McShane during the Q&A after the premiere;
“That’s the first frame I have seen and it was fucking amazing. I had a fucking good time!” -Ian McShane 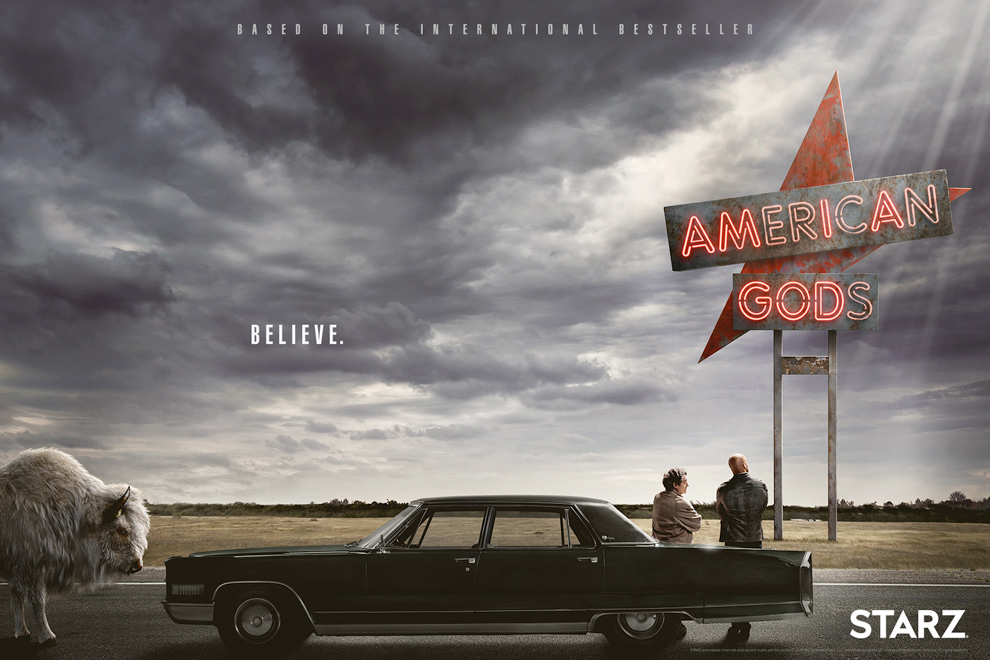