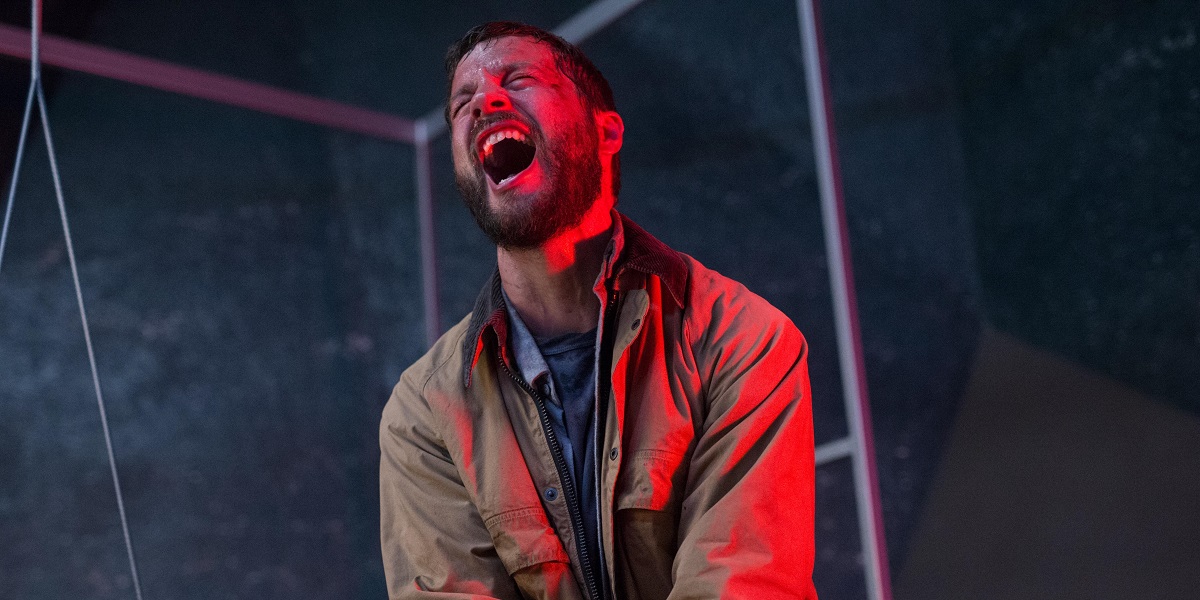 In the past 14 years, the name Leigh Whannell has become synonymous with horror. The pen behind the first three Saw films, each Insidious entry (directing the 3rd), Dead Silence and the Elijah Wood helmed Cooties has had the career start that most luminaries of that field would dream of. For his second directorial feature, Whannell turns his attention to a new genre, while still bringing the same amount of fun and creativity that have been a staple of his previous work. Cheekily described as “Death Wish: The Next Generation“, Upgrade is the kind of film that bursts onto the scene ready to immediately be deemed a new cult classic. That’s for good reason, as it’s hard to think of a film recently, which blends action, fear of technology and humor, quite the same way as is done here.

The world of Upgrade is that of the “near distant future”. Technology reigns supreme and integrates itself into every aspect of normal life. On the outside looking in, is Grey Trace (Logan Marshall Green). Grey is a self-described “technophobe”. More at home crafting with his hands, than relying on any assistance. That much is readily apparent, as he restores “classic” muscle cars for wealthy. A niche field, given that most cars on the road are fully autonomous. Not that he needs to work, as his wife, Asha (Melanie Vallejo) heads a prosthetic company, specializing in artificial limbs for veterans.

One night after dropping off his latest restoration, the couple end up in a major car accident. Stranding on the bad part of town they’re menaced by a gang, sporting state-of-the-art cybernetics . The aftermath of that evening sees Asha murdered and Grey confined to a wheelchair. Months go by and no leads turn up, even though local officer Cortez (Betty Gabriel), who shares Grey’s disdain for technology, genuinely seems to want to help him find justice. At his darkest point, Grey is visited by tech titan Eron (Harrison Gilberston), who makes him an offer too hard to refuse.

Turns out Eron has a revolutionary computer chip implant, called STEM.  It’s the kind of device that employs the host with almost superhuman abilities. He wants Grey to test it, as a chance to feel whole again, sensing that the man has lost all will to continue. What neither he, nor the creator could’ve envisioned, is that STEM’s sentience manifests itself as a voice in

Squint ever so slightly and it’s easy to imagine Upgrade as a solid B-movie straight out of the 80’s or 90’s. Doing so doesn’t belittle the film at all. More so, it giddily and fully embraces the kind of film that brings to mind. Elements from Robocop, The Terminator, The Matrix and other films of that ilk can easily be seen throughout. Rather than rely on references though, these pieces are woven organically into the brisk 95 minute run time.

Upgrade leans into the gleeful depravity that unfolds on screen with a reckless abandon and at an almost breakneck pace. The few actions scenes that pop up are both wickedly inventive and brutal in their execution. An early knife fight is shot as if Sam Raimi were to direct the next John Wick installment. With Whannell’s constant collaborator James Wan making the leap to tent-pole mega-blockbuster fare look easy, don’t be surprised if Hollywood comes knocking on his door next.

Whannell’s also a master at wringing the most out of his comparatively meager budget. Limiting locations and unnecessary CGI special effects goes a long way. It’s hard to think of the last time a future city was rendered this nice, in a film at this price. Usually they end up looking chintzy or cheesy. Not so here. Helping matters further is a game performance from Logan Marshall Green, whose physicality is something to marvel at. Small films of this nature usually never feature actors committing as hard as he does. Upgrade is all the better for it. Just watch the subtle movements Green makes when both confined to a wheelchair and later when STEM is helping to control his body. He could still use some pointers when it comes to line delivery, but it’s hard to fault someone who cares about the finer details of their craft.

From top to bottom Upgrade is joyously ridiculous and always captivating. The ending to is decidedly preposterous, but in a way that’s true to the story being told and will likely leave the audience smiling. Even if they’re shaking their heads or rolling their eyes as it occurs. After all, this isn’t some grand refinement of the revenge-thriller subgenre, but one made with confidence and a big focus on fun. That emphasis is key though and what makes the film a resounding success. There are many many movies that clog up movie theaters throughout the year that don’t give you the most bang for your buck. This is the rare case that actually does.

editor’s note: Upgrade had its world premiere at SXSW, where it won the audience award for “Best Midnighter”. It opens wide across America in June.