SXSW: We Gambled, Drank and Got Booked for a Crime at ‘The Highwaymen House’ Interactive Experience 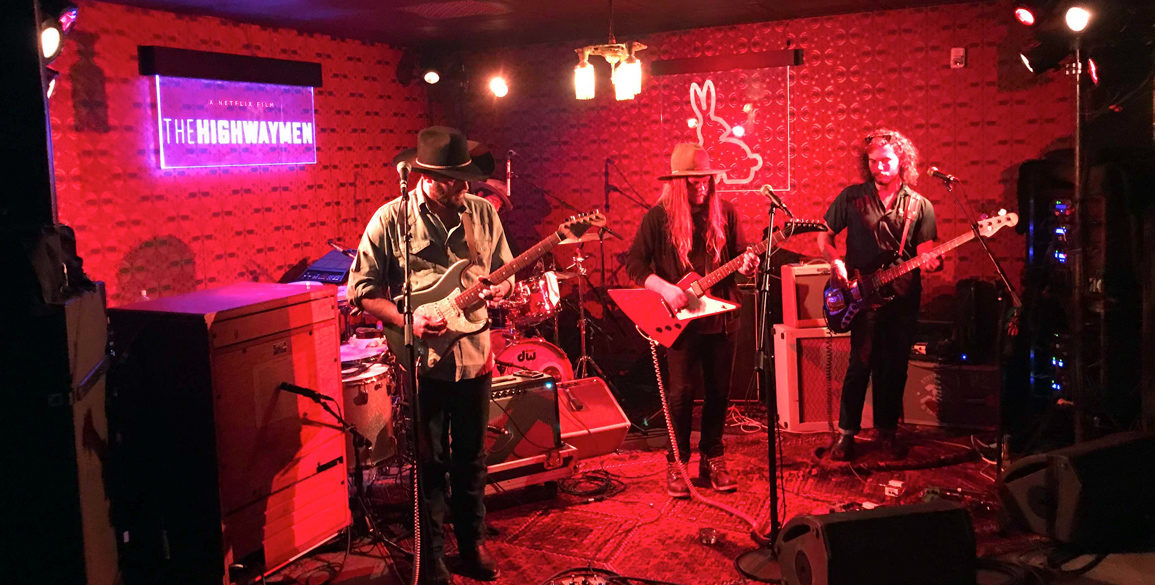 The Boom Howdy team kicked off SXSW in style by going back to the 1930’s to hunt for Bonnie and Clyde at “The Highwaymen House.” An activation for the new Netflix film ‘The Highwaymen’ starring Kevin Coster, Woody Harrelson, Kathy Bates and John Caroll Lynch set to start streaming March 29.

The interactive experience transports guests to the basement of a 1930’s speakeasy complete with a live band, general store, booze and gambling. Each guest received an RFID badge with their name and email attached to it so they could rack up points that could be exchanged at the “General Store.” You could get points by asking actors decked out in clothes from the era questions about Bonnie and Clyde or the notorious “Lumberjack” who as a criminal at large.

For the socially impaired you could also earn points by playing Texas Hold’em, Blackjack or getting your mug shot taken for the latest crime you have committed.

When you sit down to gamble you played 5 hands of poker or blackjack. The person with the most winnings at the end would be awarded 100 points on their RFID. Characters occasional joined the game and added some extra snark.

The bar featured two themed drinks and were free all night long for the media preview event.   We grabbed a drink and headed over to the mugshot station to confess a crime and get booked. My slate read “The Highwa Men House SXSW Austin TX 3/8/19” I was booked for Arson that took place in another county over.

What do you do after getting out of jail for arson? You hit the card tables of course. During our game of black jack a burlesque show burst out behind us before a criminal interrupted the show. He was immediately approached by Texas Rangers who eventually took him down.   Unfortunately it was not the Lumberjack. The search continued.

The Boom Howdy team ran the tables before moving onto some character interrogation as we tried to piece together clues and get assignments from them that would help us earn additional points.

We got up from our table and headed to the General Store. Here you could redeem your point for seven different prices that included; Jack Mason Watchers (5,000 its) Stetson Hats (2,500 its) Wrangler Denim Shirts (2,000 pts) flasks (1000 pts) Patches (500 its) Bandanas (250 pts) and commemorative pins (100 pts)   I was able to cash my points our for a branded Highwaymen flask and commemorative pin.

Overall the experience was great and gave fans eager to learn more about the film a chance to immerse themselves in the era. The band was great, but I do feel like they have could themed the music a bit better and made that aspect feel more like a speakeasy. It made it hard to communicate with the actors.   I also would have liked one more interactive experience that involved a touch screen to learn more about the film or perhaps house challenges that you could unlock more points. Other than that it was well worth the two hours our team spent at the event.

If you are interested in checking out The Highwaymen on Netflix it hits the steaming service on March 29.

To hear more from the cast about their take on the Bonnie and Clyde story and the Texas Rangers that brought them to justice check out our interview segment.