SXSW 18: ‘Unlovable’ Is a Colorful Approach to a Dark Subject Matter

Unlovable stars Twitter veteran Charlene deGuzman in the role of Joy, a sex and love addict whose struggles are loosely based on deGuzman’s own personal battle with both addiction and recovery.  In fact, the film’s origins stem from a television pilot that deGuzman wrote and later sent to well-known indie writer/actor/director/producer Mark Duplas via a Twitter direct message.  Duplass was immediately attracted to deGuzman’s story and the duo, along with Sarah Adina Smith, adapted the pilot draft into a feature length film.

The film opens with Joy near rock bottom, who in a seemingly light hearted manner attempts to take her own life via an overdose of cough syrup (and cake).  Fortunately this attempt does not go as planned and the story truly begins.  Joy seems destine to repeat the same mistakes in her ever present desire for the love she won’t even give herself, and this finally reaches a breaking point when her boyfriend Ben (Paul James) tells her she needs to “Get Help” while subsequently ending the relationship.

Joy finally seeks the help she so desperately deserves by entering a 12-step program to confront the demons of her love addiction.  Here enters Maddie (Melissa Leo) a fellow member of the support group with a warmth and kindness stemming from years of battling her own demons and the following total commitment to herself and the program.  Joy asks Maddie almost immediately to be her sponsor, a notion that Maddie initially rejects.  It’s only after sees Joy’s pain and hopelessness that she eventually agrees, setting Joy up for 30 clean days of recovery in Maddie’s grandmother’s guest home.

Even with the newfound support and resources, Joy struggles deeply on her road to recovery.  Pink strips of masking tape go up on the wall of the guest house, one for every clean day completed, only to be ripped down as Joy relapses, returning the 30 day counter to zero.

When Joy’s recovery seems impossible once more, we meet Jim (played by John Hawkes), Maddie’s estranged brother living with their grandmother (Ellen Geer) and acting as her caretaker.  Hawkes brings a fantastic since of almost clinical awkwardness to the character with a gentle warmth of a man battling his own demons with the ideas of happiness and his relationships with the limited people in his life.   Slowly Joy and Jim develop a friendship rooted not only in their mutual sense of brokenness, but also the literal music the duo begin creating in Jim’s garage.  This therapeutic pastime is a genuine pleasure to watch as deGuzman and Hawkes’ have a wonderful chemistry both on screen and in the music they play.

Unlovable brings a fresh and colorful face to the genre of addiction and recovery with deGuzman delivering an authenticity that no doubt stems from countless battles with her own personal demons.  If you witnessing a character defeat seemingly impossible obstacles from both outside and within, then Unlovable is a can’t-miss. 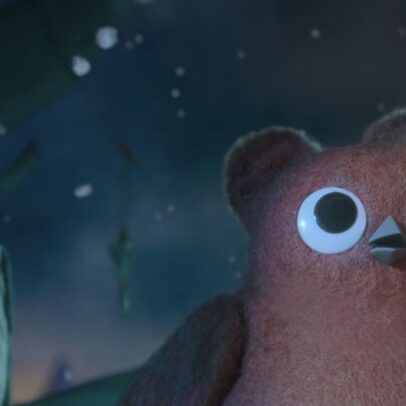