Composed entirely of masterfully edited propaganda & defense films produced in the 50’s by the United States military and other agencies for military and civilian audiences alike, The Atomic Cafe explored the myths surrounding nuclear weapons, including the damage they create and safety measures taught to minimize harm from their destructive force.

The compilation film was a hit when it opened in March of 1982 at the Film Forum, later playing in packed theaters all across the country. The Atomic Café obtained positive reviews, including the New York Times’ Vince Canby calling it, “A stunner! Has one howling with laughter, horror and disbelief.”

The film is packed full of dialogue and imagery that seems comically impossible to believe by today’s standards. A cartoon turtle teaches children to “duck & cover” under their desks, where they’ll remain free from the harm of an atomic bomb’s explosion and subsequent radiation. A U.S. Army officer describes the atomic bomb as a “beautiful sight to behold when viewed at a safe distance,” Soldiers are assured that running into the affected area of an atomic bomb is totally safe if done so with haste. These ideas seem absurd with what we as the public know today, and yet given the current administration’s rhetoric regarding nuclear weapons and North Korea, The Atomic Cafe seems just as relevant now as it was the day it was first released

“Kevin Rafferty, Jayne Loader and Pierce Rafferty have made a landmark film about the nuclear age that remains just as relevant and darkly comical today as it’s ever been,” exclaimed Richard Lorber, CEO of North American distributor Kino Lorber. “We wish times were different. But at least we have The Atomic Cafe to expose the horrific prospect of the Armageddon with humor, style and historical perspective.”

In 2016 The Atomic Cafe was named to the Library of Congress’ National Film Registry. The newly restored 4K version of the film premiered at SXSW was produced by IndieCollect, a non-profit organization based in New York who’s mission is to both save and restore American independent films, so that they may be viewed in the most current and state-of-the-art formats. Funding for this undertaking was provided by the Library of Congress’ National Film Preservation Board, by way of a grant from the Council on Library and Information Resources (CLIR). 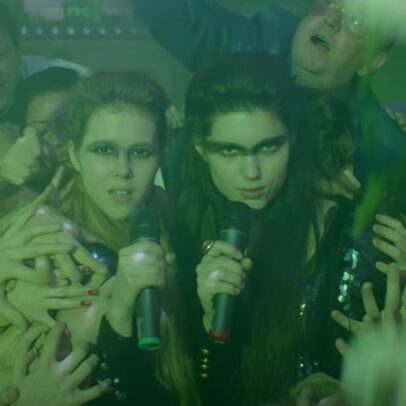