Rian Johnson took the stage in Austin to give an interview about his time making ‘Star Wars: The Last Jedi’. He was in Austin to premier a documentary called ‘The Director and the Jedi’ which is the official making-of doc for the newest Star Wars film. Joanna Robinson of Vanity Fair moderated the interview with Johnson as he explained how he went from the world of independant film to directing the biggest movie of 2017. Robinson started the hour plus conversation off by asking Johnson what were the movies he grew up on as a kid and he, unsurprisingly as a child of the 1970’s, said Star Wars. He also mentioned other works by Spielberg and Lucas as being foundational to his youth, with films like ‘Jaws’ and the Indiana Jones series..

He talked about his first film ‘Brick’ and how hard that was to get made. He got out of film school with a screenplay he had wrote at age 22 and spent all of his 20’s trying to find financing. He said he was doing everything he could based on the independent model he had in front of him at the time, but eventually he turned to family to help him finance his first film. When asked how young filmmakers starting out should go about making their first projects, Johnson said he wished he had some great practical information and could offer more than platitudes like “Go for it!”. Although he did have some really sound advice for the entire hall. He told everyone “the only advice that matters is to have a piece of material you know and care about and don’t stop until you have made it” & “If you have something you want to get made, and you don’t stop until it gets made. It will get made”. That’s great advice for anyone attempting to accomplish something in their career. He wrapped up his inspirational portion of his interview by saying that the biggest thing a filmmaker can do is developing their own voice so that “no one can tell stories exactly like you do”. He called this the “VIbranium” of the movie industry.

Next, he moved on to his other projects that existed between ‘Brick’ and ‘The Last Jedi’. Namely his wonderful science fiction film ‘Looper’ and his time directing some of the most heralded episodes of ‘Breaking Bad’. The crew he has worked with has stayed the same largely since Brick. He shared a funny anecdote about how much his cinematographer wanted to shoot ‘The Last Jedi’ digitally and put together an entire presentation on it. However, The movie was ultimately shot on film. He explained that his second film ‘Looper’ was actually based on an idea he had before he made ‘Brick’ and there are actually short films he made when he was trying to get funding for brick that were based on the concept. One of the interesting points he shared about directing ‘Breaking Bad’ was that television, if done right, should be pushing the character forward each week and showing growth. I think you can really see that ethos in ‘The Last Jedi’.

Finally Johnson moved the conversation to a Galaxy far, far away. He told everyone his favorite thing about working with Carrie Fisher, “[She] loves being pitched jokes”. Mark Hamill on the other hand wanted to delve more into the progression of Luke’s character and the turn he had taken. He said Hamill challenged him on his characterization of Luke, which he felt was a good thing. He addressed the controversy his film has received and made a great point about these movie as modern Myths. He said  Myths are not made to sell action figures, they’re made to look at the most difficult parts of our lives and He was trying to take the Star Wars myth and push it to beyond the initial hero’s journey of the original trilogy. They played a little bit of footage from ‘The Director & the Jedi’. It appears to be much more involved than your typical blu-ray extra and reminded me of the great documentary that accompanied “Episode I”.

The afternoon ended with a very special guest. “Hey Kids, it’s Mark Hamill” joined Johnson on stage, jokes at the ready. His first lines to the on their feet crowd were “This is just a cameo at the end, which i’m very good at”. Hamill referenced the documentary as well and Carrie Fisher saying that it was hard to watch it at times because he still feels like she’s here. They both shared stories of her and said it was impossible not to have fun and laugh with her on set. Hamill ended the afternoon by saying how happy it has made him to see a new generation take over and he’s so proud of the work the Daisy Ridley, John Boyega and Oscar Isaac are doing. Maybe it’s all his years on the comic-con circuit, but I’ve never seen someone enter a room and be able to take it over so effortlessly as Mark Hamill.

Overall it was an awesome interview and got everyone excited to pick up “Star Wars: The Last Jedi’ on March 27, 2018. Which is good because who knows who was actually planning on purchasing it before this event.

Check out the full panel below. 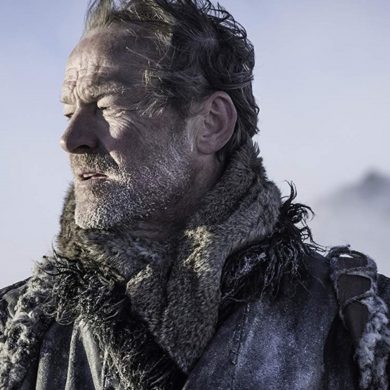