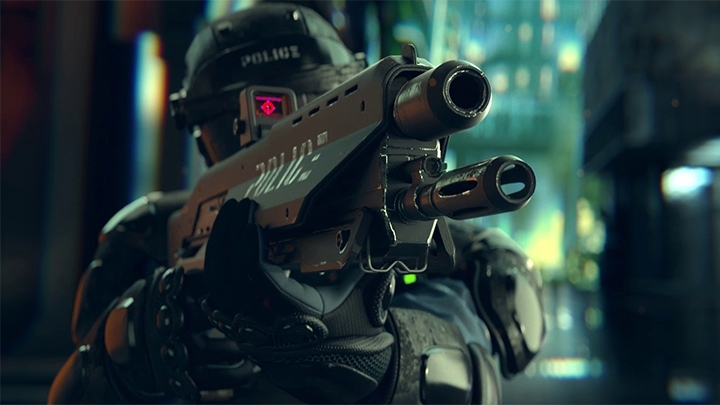 I have this thing for dystopian movies and games. I love them. Mad Maxx, Tank Girl, Fallout: I eat them up like pieces of radioactive candy. During the Microsoft conference of E3 2018, we got a look at a game that is the digital sequel to a tabletop RPG game called Cyberpunk 2020. Instead of tabletop, this game takes the futuristic punk dystopian world to you with tasty graphics and smooth gameplay. Take a look at Cyberpunk 2077.

I’ll be honest, Cyberpunk 2077 reminds me of Rage 2 but with a more successful future society…and robots (although it could be I have just been streaming E3 too long today). It would seem the punk style is in for games this year. Set 57 years after the first game, this game is set in the fallen United States, specifically Night City, California. The country has been broken and divided into smaller pieces and is bankrupt, starving and owned and ruled by mega-corporations.

Cyberpunk 2077 is an open-world, single player RPG developed by CD Projekt Red (the company that brought you Witcher 3) on the REDengine 4and it looks really good. With the bright colors of the cities and characters played against the dry and dusty environments of the outdoors and the shining neon of the cities, it is a feast for the eyes.

In game, players will need to acquire a translator to understand the languages that some of the other characters speak, which is a concept I haven’t really come across in video games and reminds me of the beginning of Hitchhiker’s Guide to the Galaxy. There are eight playable and customizable characters and the choices that the player makes allows for several endings of the game to be achieved.

Although no release date has been announced, Cyberpunk 2077 will be available on PS4, Xbox One and PC. Keep checking in for more news and announcements from E3 2018.

Freeform Announces it Will Premiere ‘Marvel’s Cloak & Dagger’ at SXSW