Bryan Bertino’s The Strangers, in my opinion, was one of the best horror films in the last decade. It played on atmospheric fear and isolation terror better than many films in recent history. Playing on real life fears and based on an actual true story to boot. Throw in some creepy mask and a slow burn that leaves you on the edge of your seat and you have a true modern classic.

The subtly of the film reminds me of Carpenter’s vision. The tracking shots and the slow creep of bag head in the background ramp up moments of tension without the need for violence or tons of gore as the payoff. In fact there are really only a couple of scenes that are gory and they never rely on it. Another staple of the original Halloween film. That is where the atmospheric fear plays into what makes The Strangers so good. Along with the sound design.

The soundtrack at times becomes another character in the film. The score is melancholy in nature but the songs bring another sense of unease. Merle Haggard (Mama Tried), Gillian Welch (“My First Lover”) and Joanna Newsom )”Sprout and the Bean”) all have songs that capture different feelings and moments in the film – which is what a soundtrack should do and it does so effectively. It is funny when you can frame a song in a certain way that makes it feel offputing when otherwise would not feel creepy at all. But when Gillian Welch’s song “My First Lover” gets stuck on repeat it becomes a scene that builds with a frantic pace lead by the song itself.

As I mentioned before the sound design on the film is another key piece to its success. Bertino shot most of the film’s interior shots on a sound stage and often times wouldn’t tell actress Liv Tyler when someone was going to try and attack her or slam something against a window. So most of the reactions we see from Tyler’s performance are genuine moments of fear. So every bump in the night, tapping on the window became amplified in scenes that were otherwise still and quiet.

The Strangers themselves play on a fear factor that many killers have relied on for years. The mask and the emotionless nature of them. The simplicity in the design. Bag head (Kip Weeks) in a tweed suit is one of my favorite horror characters in years. Complimenting him are Dollface and Pin-Up girl. They also have emotionless expressions as they relentlessly stalk their victims all while you feel a sense of cheer emitting from them.

Not only are these characters effective in their nature but they work as a cohesive unit to terrorize a couple that share a heartbreaking moment early in the film but are now forced to lean on their love and admiration for each other to work together to stay alive. The push and pull of their relationship that we see unfold on screen is depressing – but somehow these acts of violence and threats toward them make them see how much they actually care for one another.

The thing that is most terrifying? Not the mask or the atmosphere created by the sound design. It was the killers motive. “Because you were home.” Senselessly stalking their victims. Jason Voorhees was out for revenge on teens that left him to drown while they let their hormones run wild. But the Strangers, they didn’t need a motive. “Because you were home.” are the only other words spoken in the film after the first interaction with Dollface. Meaning it could happen to any of us. Home invasion.

This was a low-budget indie folk invasion film that worked so well on so many levels. It did not make a lot of bank in theaters on opening weekend. But once word spread about The Stranger is was able to bank $80+ million at the box office on a budget of only $9 million. After the long rumored sequel it finally saw the light of day in 2018. The style was drastically different than the original. The charm and subtly that worked for the first film was vacant in the counterpart. It was a faster paced horror flick that didn’t fair nearly as well pulling in only $27 million (on a $5 million budget.)

I would love to see Bryan Bertino revisit the series for a third chapter and bring it back to the roots.

This is one film I make sure to watch during the Halloween season. 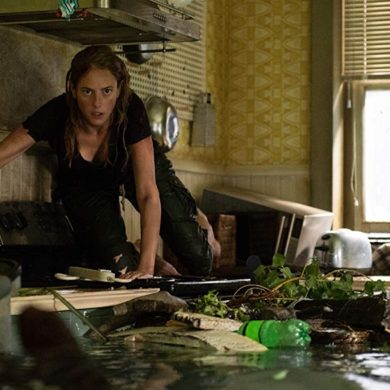