Review: Twin Peaks Hour 4: “Do you understand the situation, Albert?”

In many ways, the fourth hour of Showtime’s Twin Peaks revival is an extension of the third.  Most of the time is spent with Agent Dale Cooper (Kyle MacLachlan) as he continues his re-entry into the “real world.”  Also, after Gordon Cole (David Lynch), Albert Rosenfeld (Miguel Ferrer) and Agent Tammy Preston (Chrysta Bell) arrive in South Dakota, Gordon again states the probable feeling of at least some of the show’s audience when he says, “Albert, I hate to admit it, but I don’t understand this situation at all” and asks, “Do you understand the situation, Albert?”

Actually, this hour is much easier to understand than the assault on the senses of hour three. It includes what I’d call a big surprise.  With the way Twin Peaks plays with time, past and present mingling, I assumed the FBI’s arrival in South Dakota took place after Cooper either came to his senses or was identified by authorities.  However, I said, “A-ha!” aloud when they visited his prison cell and we learned it was actually Bad Cooper who had been discovered.  He didn’t die in the car crash after all.

The question then becomes whether or not the FBI believes it’s the real Cooper. It doesn’t seem like they will, although they don’t know exactly what’s happening.  Gordon says, “This business that we witnessed today with Cooper; I don’t like it.”  Albert replies, “Something’s wrong.”  Gordon says, “He didn’t greet me properly, if you know what I mean.”  I hope Albert knows, because I don’t.  I thought the fact that Bad Cooper greeted him with thumbs-up and a smile lent some authenticity to his character.

That’s all late in the episode, though. It begins where it left off last time at the Silver Mustang Casino.  Cooper continues shuffling through aisles of slot machines winning jackpots, gleefully stating, “Hello-oh-oh!” each time a siren sounds and coins fall.  He’s recognized by a colleague as “Dougie Jones,” before management sends him “home” (Lancelot Court… red door) in a limousine.  There, his wife (Naomi Watts) greets him with a hearty slap and an angry question, “Where have you been?!?” 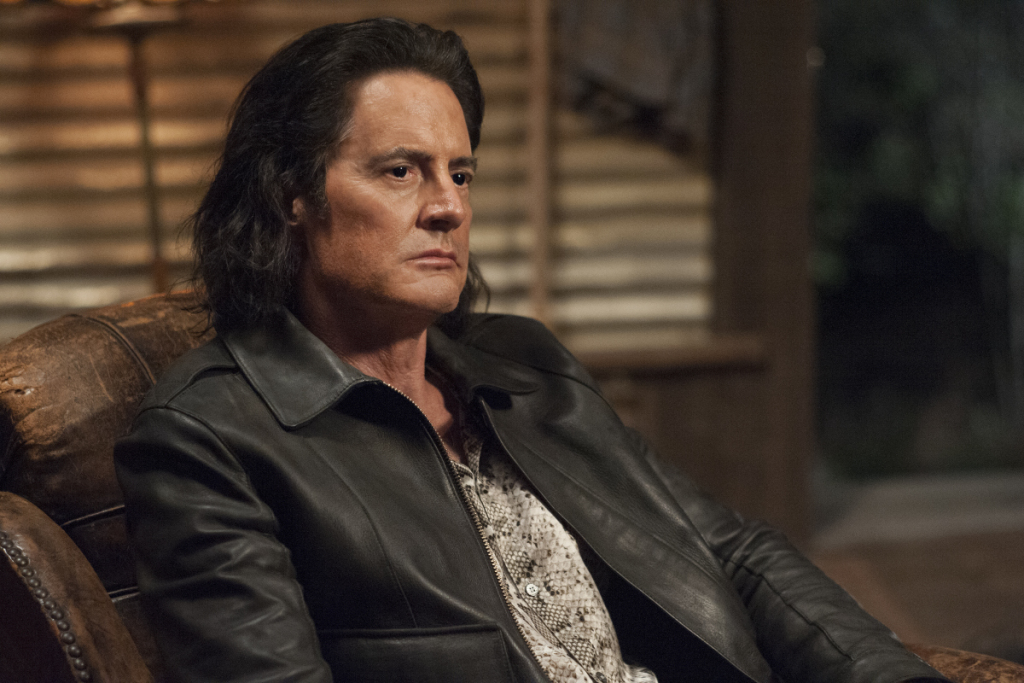 She calms down when she discovers his bag of money, in which there’s enough cash “to pay them back.” Whom, I wonder?  Later, still in a daze in the bedroom, the one-armed man in the Black Lodge fades into the scene.  “You see me, don’t you?  You were tricked.  Now one of you must die.”  Considering that the real Dougie either evaporated in the Black Lodge or now exists as the tiny gold ball that the one-armed man shows Cooper, I wonder if the trick was that Bad Cooper was not sucked back into his prison…

…therefore, Cooper must face him in a climactic battle to see who gets to remain in the “real world.” There’s more mystery revealed about Bad Cooper when he claims he’s been working undercover with Phillip Geoffries, who was played by David Bowie in Twin Peaks: Fire Walk with Me.  This seems unlikely when Gordon tells Tammy that Phillip is a former FBI agent and we get the impression he disappeared long ago.  However, we previously saw Bad Cooper asking on his walkie-talkie if he was speaking to him.

Perhaps Phillip went rogue as well and has been working with Bad Cooper, unbeknownst to the FBI. This theory is validated when Albert confesses to Gordon that he authorized Phillip to give Cooper information about “who our man was in Columbia” and a week later, that man was killed.  My favorite line in this hour is when Gordon tells the warden, “I expect you to give him (Bad Cooper) his private phone call.  And I expect to hear all about it.”  Almost any of Gordon’s lines are funny.  Hard of hearing, he earlier mistakes “car sick” for “Cossacks.”

Meanwhile, quite a bit happens at the sheriff’s department in Twin Peaks. We learn that Lucy is terrified of cell phones, unable to grasp how they work.  We meet a new Sheriff Truman, Harry’s brother, Frank, played by Robert Forster.  And we learn that Bobby Briggs (Dana Ashbrook) is now a deputy who’s been tracking the entry of Chinese drugs into the country from up north.  He believes Cooper is responsible for the death of his father and breaks down in tears when he sees Laura Palmer’s homecoming queen picture. 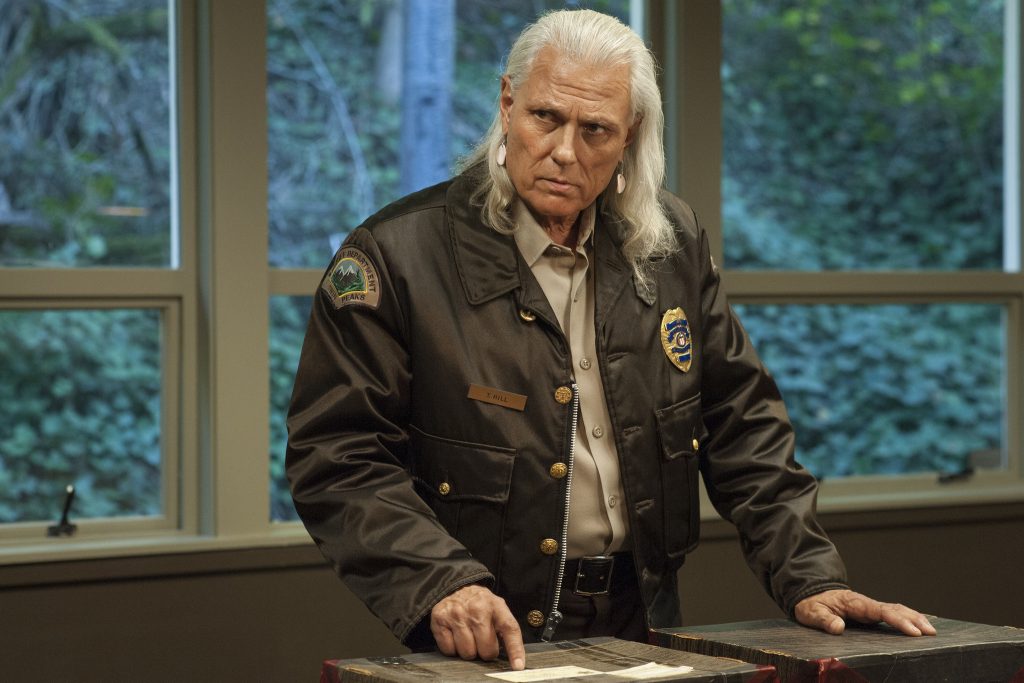 It’s unclear if Frank is going to be as accepting of everyone’s eccentricities as Harry was. He’s respectful while listening to Andy and Lucy’s son, Wally Brando (Michael Cera), but shakes his head when he turns and walks away.  I’d be shaking my head right in front of Wally.  He’s taken the fact that he was born on Marlon Brando’s birthday and turned it into his entire persona.  He looks like the actor in The Wild One and speaks like Don Corleone in The Godfather.  Cera’s performance is probably the most over-the-top yet on a show full of over the top characters.

Oh, yeah, remember way back when there was a murder in Buckhorn? We briefly see the investigator played by Jane Adams announce that they found a hit on the fingerprints of the man’s dead body that accompanied the head of Ruth Davenport in her apartment.  The problem is that his identity is blocked by the military.  It’s becoming less of a mystery how this murder fits into the ongoing mythology of Twin Peaks.   The military connection seems to fit with Project Blue Book, Major Briggs, and possibly even the glass box in New York City.

The episode ends as I’m now going to state I bet every episode will end: with a performance by a band at the Bang Bang Bar. Tonight it’s Au Revoir Simone for a moment before the credits roll.  What was stated just before is perhaps relevant to the location, though.  Gordon says, “Before we do anything else, we need one certain person to look at Cooper.”  He asks Albert if he still knows where she lives.  He says, “I know where she drinks.”  Is it the Bang Bang Bar?  Who is it?  My bet is on Annie Blackburn (Heather Graham)…

…who “died” in the Black Lodge during the season finale of the original series; well, as far as we know. I don’t anticipate learning if I’m right about this theory during the next hour, or even the hour after that.  It’s impossible to predict how the various plot points will be placed and spaced among the 18 hours of Twin Peaks.  It’s impossible to predict if this is even an important plot point.  If you were able to predict what happens on Twin Peaks, it wouldn’t be nearly as fun to watch.  And I haven’t had this much fun watching a television show in a long time.