Until now, producer-writer-director Bryan Bertino has made only one movie since his 2008 hit, The Strangers.  Eight years later, he returns with The Monster, which I can describe as a deeply emotional experience.  A horror movie will rarely have the same prestige as a drama, but this one reminds me a lot of last year’s Room, which was showered with Oscar nominations.  The stories are nowhere near the same, but their approaches to depicting the parent-child bond are similar.

I’ll admit it, I cried during The Monster.  Oh, I’ve cried in many movies, but I don’t know that I’ve ever shed a tear during a horror movie… well, unless it’s because it was just that bad.  The gut-wrenching terror that Kathy (Zoe Kazan) and her daughter, Lizzy (Ella Ballentine), face is mentally draining.  It’s not just because of the threat and the sacrifice that one of them must ultimately make to survive; it’s because of the specific nature of their relationship.

First, let me explain what the two characters face in the movie.  They’re driving late at night on an “old road” while it’s raining.  The road isn’t in bad condition and there are streetlights; however, it’s an alternative route due to construction.  Their car hits a wolf and spins out of control, leaving them stranded at least 30 miles off the interstate.  I said they’re stranded, but I didn’t say they’re alone.  In the woods is a vicious monster.

Although the wolf’s body indicates that it was involved in a bloody fight and they pull a giant tooth from it, they are too shaken to think much about it.  It’s only when a tow truck arrives and the wolf’s body vanishes that they begin to realize something is wrong.  (“Momma, where’d the wolf go?”)  It takes a while to get to this point in the story, but then it’s all downhill.  There’s a little bit of Cujo while they’re trapped in the car, but the scope quickly widens from there. 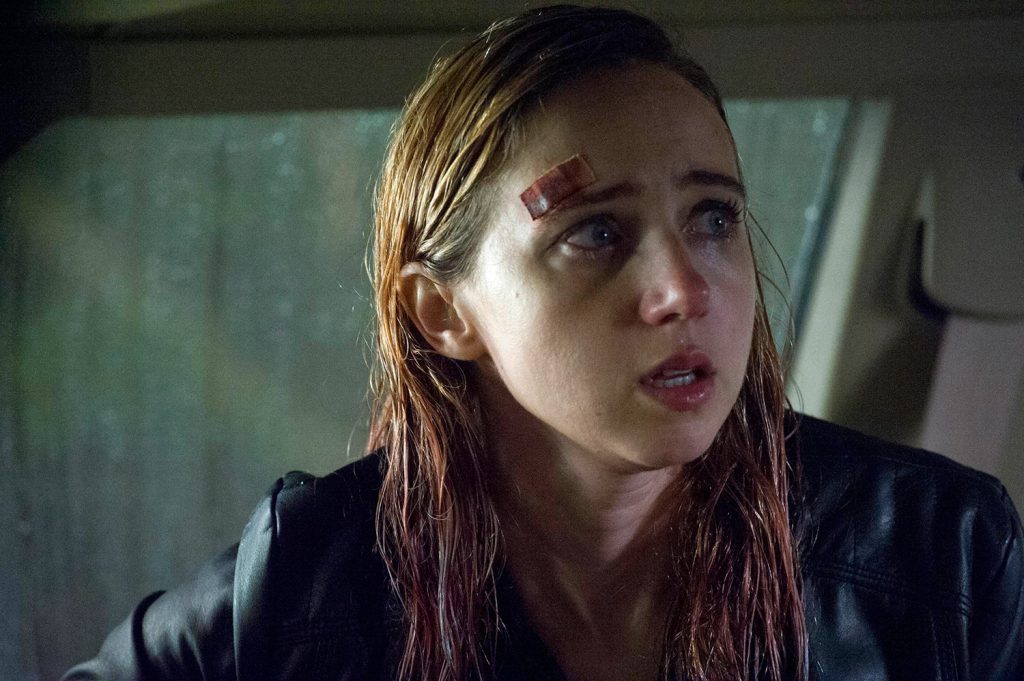 Next, let me explain the relationship between mother and daughter.  The movie opens with Lizzy trying to wake her mother.  It’s immediately apparent in this situation that it’s the daughter who takes care of the mother.  Indeed, through intermittent flashbacks we learn that Kathy is an alcoholic.  She and her boyfriend, Roy (Scott Speedman), treat her so badly that at one point Lizzy holds a knife to her passed out mother’s neck and whispers, “I hate you.  I hate you.”

Of course, she really loves her, and there’s nothing quite like being hunted by a savage beast to cause your true feelings to rise.  Not only is the weeping of a young girl because she’s scared deeply emotional and mentally draining, but it’s exacerbated by the logical extension of her pleading with her mother not to die and leave her alone.  Some simple dialog between the two is particularly effective, based on the honesty that’s expressed:

When it looks like Kathy will have to make a tough choice:

Of course, this only works because the threat is so real and the monster is so scary; otherwise, the drama would be overwrought.  The creature is only a little larger than the size of a man, but is a hulk, nonetheless.  It’s strong enough to knock a speeding ambulance completely off the road and overturn it, yet is also stealthy.  It has a shiny black body, so it’s either wet or oily, and it has a mouth so full of teeth, it probably can’t close.

The Monster has no false or jump scares; every scare is authentic and holds consequence.  It’s filmed so that most of its scenes are off center.  What I mean is, Kathy or Lizzy may appear on one side of the screen with only the other side of the car or the background taking up the remaining two-thirds, or so, of the screen.  That makes everything more suspenseful because you’re expecting that at any moment something will happen in the “empty” space.

If you want to dig deep, you could say Bertino frames one character on one side of the screen and doesn’t show the other at the same time because it represents the divide in their relationship.  Later, as the two physically become closer based on their situation, they’re also becoming closer in their regular, everyday mother-daughter relationship.  Who knows if that’s the intention, but it demonstrates one way The Monster is potentially deeper than most creature in the woods horror movies.

If you can’t tell, I really liked this movie!  It almost goes without mention that it wouldn’t work without the right cast.  Kazan looks and feels her part, and Ballentine is a talented natural.  This is a movie that’s quite special.  It’s intense and scary where it needs to be, and, while it doesn’t need to be deep and emotional, it wouldn’t be the same experience without it.  I mean, how many monster movies have you seen where you actually care what happens to the characters?

The Monster is available now on Direct TV and will open November 11 in theaters and On Demand.