Lights Out does the best job I’ve seen of remaking a J-horror (Japanese horror) movie.  The thing is, though, that’s not what it is.  It’s an original American movie based on the 2013 short film by David F. Sandberg that became an internet sensation.  Sandberg was given the opportunity to direct the feature version of his story and he does an excellent job of expanding a 3-minute short into an 81-minute feature.

The screenplay by Eric Heisserer keeps the story simple… really simple. That’s not a bad thing.  It makes Lights Out true to the spirit of the source material without bloating it.  In this case, it’s a strength instead of a weakness.  Most importantly, it allows the movie to do what it does best: scare the heck out of its audience.  Sandberg is gifted at setting the mood and creating suspense with a terrifying payoff.  Even the rare jump scares don’t seem like they’re calculated.

It helps that the foundation for the horror is such a great concept. Some type of creature, probably a ghost, is not visible in the light.  Lights on, you see nothing.  Lights out, you see glowing eyes from the shadow of a woman lurking in the darkness.  Lights on, nothing.  Lights off, she’s moved closer.  That’s it.  When this woman can control the lights, it makes it incredibly exciting for her potential victims to find the illumination that will protect them.

The backstory that puts meat on the bones of this concept comes from the character of Diana, played at various ages by Ariel Dupin, Ava Cantrell and Alicia Vela-Bailey. The mystery of the movie is discovering why she’s “haunting” Sophie (Maria Bello) and her family.  This is the part that reminds me of a J-horror movie like The Ring, to which this mystery seems very familiar.  At the same time, there’s something less easy to pinpoint that gives it a similar… feeling.

The bones on which the meat hangs is the aforementioned Sophie and her family, all of whom have abandonment issues. Young adult Rebecca’s (Teresa Palmer) father (Sophie’s first husband) left when she was a child.  Rebecca leaves Sophie, when her mother’s mental illness becomes more than she can bear.  Child Martin’s (Gabriel Bateman) father, Rebecca’s stepfather, leaves, sort of, in the movie’s prologue.

None of them handle the abandonments well, and the only flaw in the story is how heavy-handed Lights Out is at making sure we know how it relates to Diana’s existence.  They talk so much about leaving each other, why they did it and how they’re afraid of them doing it again.  We get it, already.  This is a small complaint, though, because at least the movie tries to incorporate a larger theme that resonates within the story it’s telling.  It gives it heart.

I re-watched the original short film after seeing the full-length version. Its star, Lotta Losten, has a cameo at the beginning of Lights Out.  It’s a similar set-up, but takes place in the workplace instead of at home.  This demonstrates another way that the concept is expanded: Diana is not held captive in one location.  Therefore, the horror can take place anywhere there’s both light and darkness, even if it’s simply from a neon sign flashing on and off.

Sandberg is next directing Annabelle 2, a sequel for which I was not clamoring.  Now though, I’m eager to see what he does with it.  The talent he demonstrates here transforms what could have been a quick, cheap throwaway horror movie into something special.  In some ways, he may have more potential than James Wan.  While I loved The Conjuring 2, Lights Out is tighter… less bloated.  It delivers its scares in a more efficient way. 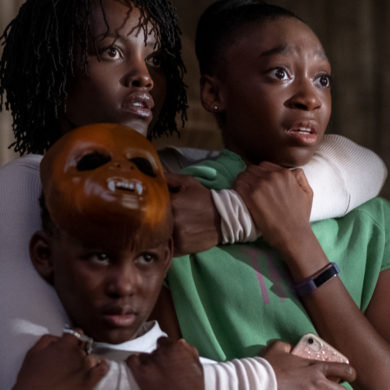