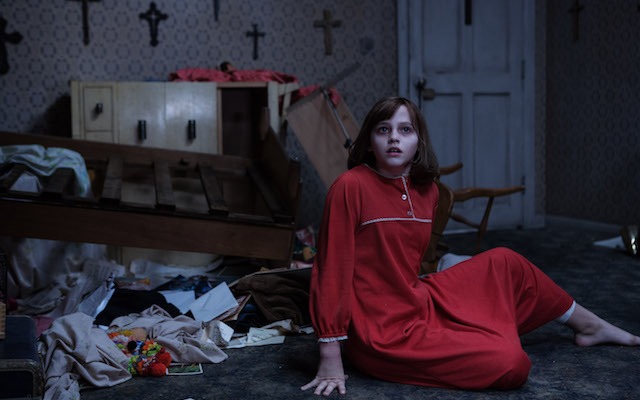 In The Conjuring 2, James Wan’s camera moves with more fluidity than I remember witnessing in his previous movies.  The style adds an additional layer of creepiness to a story that doesn’t need any help being scary.  As viewers, we feel like a spirit floating in the air, following its victims in and around a run down home in Enfield, England.  We move through closed windows, glide unevenly around corners and drop from the sky to join people as they go down into the basement.

This technique brings us into the story, makes us part of the family, then leaves us trapped as much as they are by a terrifying mystery that ultimately causes the church to reach out for help across the pond.  Fresh off a big case in Amityville, New York, where Ed and Lorraine Warren (Patrick Wilson and Vera Farmiga) faced demonic forces that cause the latter to make her husband promise they won’t take any more cases, the couple reluctantly travels to England to make an assessment.

Based on real people and actual events, The Conjuring was a big hit in 2013 and laid the groundwork for a franchise based on the case files of 1970s paranormal investigators, Ed and Lorraine Warren.  I remember the hype surrounding its release, but I remember surprisingly little about the movie itself.  I liked it, I think, but not as much as the accompanying fanfare might indicate.  (Perhaps my memory has been sullied by its disappointing spinoff movie, Annabelle.)

Thankfully, there’s a lot to like and remember in The Conjuring 2.  It’s one of those rare sequels that exceeds the original.  I hesitate to call it a sequel, though, because it’s entirely independent of what came before.  It’s a sequel in the sense that a James Bond movie is a sequel, or that its events takes place after the events of the first movie.  Other than the Warrens, there are no significant familiar faces or plot threads.  Perhaps with a third movie, we’d realize an overall arc for the characters and experience a larger thematic story.

One of the biggest enhancements in this installment is the development of the Warren characters.  With terrific actors like Wilson and Farmiga there’s a level of commitment not present in most horror movies.  The action pauses while we learn more about them, not from a historical perspective, but from an emotional one.  In the script by Wan, Casey Hayes, Chad Hayes and David Leslie Johnson, this is all expertly woven into the overall story, which means something else unique for a horror movie: we actually care what happens.

The Conjuring 2 is an epic horror movie.  From it’s fantastic prologue casting new light on a familiar story (The Amityville Horror) to its international scope to its action-packed finale, it turns a simple ghost story into a summer blockbuster.  With its epic qualities comes an epic running time of 134 minutes.  While I’ll argue that this is too long for a horror movie, only once or twice did I feel a slowdown.  It’s somehow appropriate for the movie and will give audiences more bang for their buck.

Finally, this all works because, yes, it’s scary as hell.  Even if some payoffs don’t make you jump, there are others that do.  And even if something is not frightening to you, the atmosphere is consistently dark and foreboding.  My friend put it best when talking about the scares, “I knew they were coming, but they still got me.”  That’s a sign of true filmmaking craftsmanship.  When you acknowledge the set-up, anticipate the scare, then jump out of your seat regardless, you’ve been expertly manipulated.

After watching The Conjuring 2, I suggest doing some research on the actual events surrounding the “Enfield Poltergeist” from 1977-1979.  You’ll recognize names and events that you might otherwise assume were fiction.  For me, that adds another layer to an already multi-layered movie.  It makes anything scarier when you believe that it just might be real.  There’s a Hollywood twist in the movie, but who’s to say the filmmakers’ explanation for the unexplained events isn’t as good or as real as any other.

One of the recurring themes in The Conjuring 2, and the true story, is how much of the Enfield Haunting may have been a hoax.  This doesn’t really play as a mystery in the movie, which takes a definite stance on the issue.  However, it embraces it as a possibility, rather than sweeping it under the rug.  This adds to the overall well-roundedness of the movie, its realistic approach to something unreal, and its intelligence in a genre that’s sometimes dumb.  I’d recommend it as a movie for all audiences, not only for horror fans.