Gore Verbinski wants you to embrace the unexpected. In an exclusive telephone interview with Downright Creepy, the Oscar-winning director (Rango) of A Cure for Wellness, which opens nationwide tomorrow, said, “It’s a big ask to get people to get in the car and drive to the movie theater these days and that’s why you see the sort of ‘eventizing’ of things.  But for those people who remember what it’s like to go to a movie and not know… to celebrate the unknown aspect of going into a darkened room with strangers and watching something…  expect the unexpected and it should be an enjoyable journey.”

The first trailers for the movie set the internet on fire. Where did it come from and what was it about?  With the director’s name attached, a unique visual style was assured.  But what was its story?  Verbinski said he was “very involved” in the initial marketing.  “The two trailers (teaser and main) were cut at the same facility that cut the movie.”  He gets less involved as the advertising shifts to 15-second TV spots and “stuff like that.”

Now that it’s hitting theaters, he says the specific genre of A Cure for Wellness is “not immediately reducible.  That’s one of its unique qualities.  I think of it as kind of a ‘contemporary gothic.’  It certainly has a psychological thriller aspect and is in the horror genre as well.  Because this place is such an old castle on the hill that’s been watching us for a long time and offering a diagnosis, and the person going there is from our world, I think of it as a contemporary gothic.  I don’t know if there is such a thing.”

Actually, that’s the perfect way to describe it. Verbinski wrote the movie with Justin Haythe, with whom he collaborated on The Lone Ranger.  “We were just toying with the idea of something as benign as a wellness spa, a place of tranquility, and corrupting that.  We’re both fans of Thomas Mann’s The Magic Mountain and all things H.P. Lovecraft… kind of all those things in a blender, but also thinking about what it is when the curtain closes.  It’s nice there’s some residual effect, a contemporary fear, that you don’t just put the movie away. 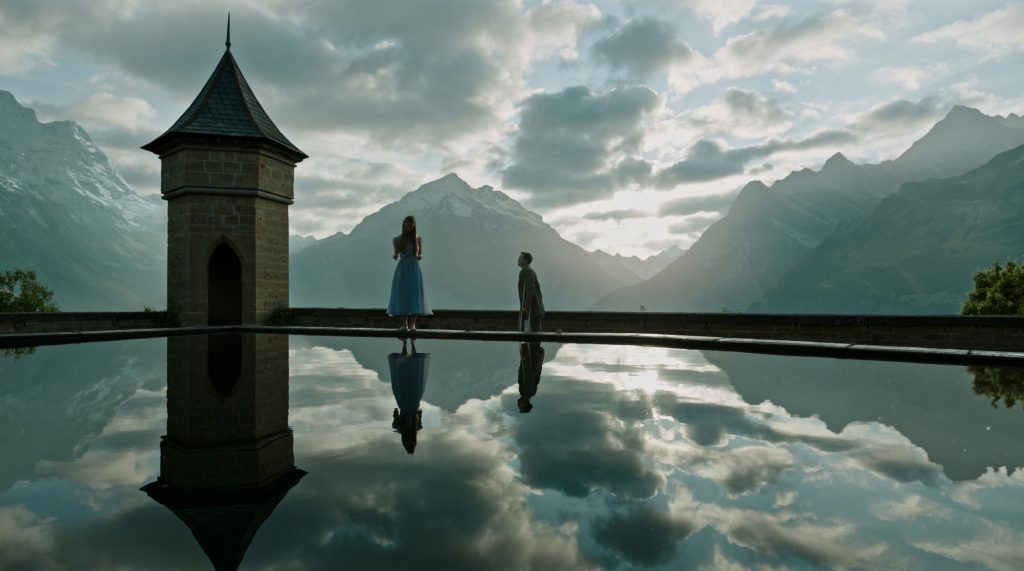 Within that framework, Verbinski asked questions about what it is to be human in this day and age. “I think as a society we’re not well and there’s a reason why we’re prey to the pharmaceutical industry, or our kale wrap, whichever way you want to go.  There’s something about if I say to you, ‘Are you not sleeping well’ or ‘Do your feet hurt?’… at some point, you’re going to say, ‘Yeah, I have that; that’s exactly my problem.’  What’s underneath that?  What makes us susceptible to that?”

When you read my review for A Cure for Wellness, you’ll notice I found a distinction between the “slow burn” aspect of the first 4/5 of the movie and the “all hell breaks loose” climax of the last 1/5.  I asked Verbinski about that.  “The movie is really about two worlds.  If you watch the movie again there are hints of the sort of gothic turn all the way through, the sense of something inevitable.  We’re firmly rooted in this genre and those things have to come to fruition.”  In other words, he thinks the movie requires a big payoff and, boy, does it deliver.

Finally, I asked him about the casting of the movie. With Dane DeHaan and Mia Goth, he deliberately chose actors whose faces may be vaguely familiar, but who are not big name stars.  “The genre creates stars more than it relies on them, traditionally.  I think it was important to remove the familiar.  So often we go to the movie theater and play the video game or go to the theme park and are familiar with the graphic novel or toy…

…or it’s immediately reducible and can be summed up in a 30 second TV commercial. But I remember going to movies when I didn’t know what we were going to get into … a sense of I’m not sure where this is going to go. We’re really trying to say there are opportunities there to make a movie that doesn’t need to be for everybody, but if it finds its champions it’ll be OK.”  This brings the conversation full circle.  Verbinski thinks A Cure for Wellness is unique and he hopes if you see it, you won’t just be watching a movie.  You’ll be experiencing it.