5 of the Scariest Masks in Mainstream Horror

Pumpkin Spice lattes, Halloween decorations and Fall are just around the corner so it seems like a great time to talk about some of the scariest mask (and characters) to ever appear on film. Sometimes it’s not the goriest monster that gives us the creeps – it’s the subtle things that make our blood run cold and the hair on our arms stand on end.

What is scarier than a porcelain doll face or a burlap sack? Not much of anything else. Psychopaths breaking into your home trying to murder you all while never speaking a word is bad enough. But these masks are absolutely terrifying. They play on some people’s biggest fears, one being the fear of dolls. This movie is filled with so much anxiety anyway and the choice of masks for our dear killers just puts it over the top!

Who would have thought that a mold of William Shatner’s face hanging off another man’s face would be so terrifying? The stark white, expressionless mask worn by Michael Myers is nightmare inducing. The fact that it loosely fit his head with matted hair on top and his crazy eyes moving from behind it was disturbing. There was no blood or guts on it but but it is iconic and scary as hell.

Originally a Halloween costume before Wes Craven got his hands on it, this mask gives us the creeps. There isn’t much detail but it’s terrifying. Shall we never forget the first time we saw the reflection of Ghostface chasing Drew Barrymore through her house. this mask haunted our dreams for weeks. It was also a hit at halloween for years after the original Scream hit the theaters. 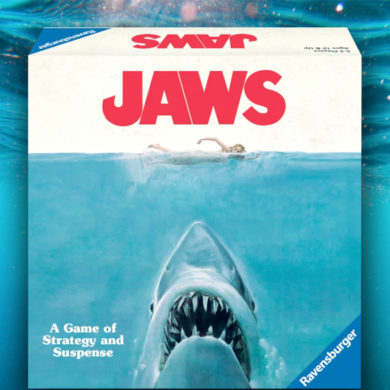 Ravensburger Releases a JAWS Board Game Just in Time For Summer