.Throughout the history of film, people have been obsessed with adapting video games into theatrical movies. Sometimes the transition makes loads of sense (Resident Evil, Doom, Tomb Raider). Other times an iconic character is transplanted onto the screen in a way that barely resembles what most people know or love (Super Mario Bros). So, when the announcement was made earlier this year of a live-action Sonic The Hedgehog being in the works, it was met with a fair share of trepidation. Today, thanks to IGN, we’re one step closer to finding out what the titular character big screen iteration will look like.

Get your first look at Sonic The Hedgehog in his new live action movie.

If you shuddered after viewing the above, that’s ok. It’s a natural response. There’s a whole lot going on in the motion poster. Most of it is terrifying. Maybe it’s the strange texture of Sonic’s trademark coiffed mane. Thankfully, IGN also sat down with director Tim Miller (Deadpool) to ask a few burning questions about the lead character’s look.  Starting of course, on that hair.

“That was always Stage 1 of adapting it to what the real world is and what a real animal would be like. It would be weird and it would feel like he was running around nude, if he was some sort of otter-like thing. It was always, for us, fur, and we never considered anything different. It’s part of what integrates him into the real world and makes him a real creature.”

That’s an interesting, albeit slightly confusing, choice of words. Not entirely sure how it’s less weird for a real creature to look less weird, while nude. Specially if it shares some human-like features, such as track runner legs. Or say, is wearing bright red shoes. Yet it turns out the most challenging aspect in making Sonic “more real”, was an aspect not even seen in the poster: his eyes.

“I don’t think SEGA was entirely happy with the eye decision, but these sorts of things you go, ‘It’s going to look weird if we don’t do this.’ but everything is a discussion, and that’s kind of the goal. Which is to only change what’s necessary and stay true to the rest of it.”

In all honesty, all these comments just make us more curious about the film. Making Miller the best salesman out there. Post-production on the project just got underway last month, giving some credence as to not revealing Sonic in his entirety. They’re in no rush to do so either, with the release date set for November, 2019.

Details on the film’s exact plot are sparse, but seems to focus on your basic “fish out of water story”. Sonic (voiced by Ben Schwartz) finds himself trapped on Earth, in the rural town of Green Hills. There he develops a friendship with James Marsden’s Tom Wachowski, a local cop. Together the two try to stay a few steps ahead of the government and Dr. Robotnik (Jim Carrey), while trying to get the blue hero home.

As with any teases for movies or TV shows we get as the year closes out, we’re probably not that far from seeing more of Sonic The Hedgehog. After all, they need to fill all those Super Bowl commercial slots somehow. As soon as any more news or photos are released, we’ll let you know. 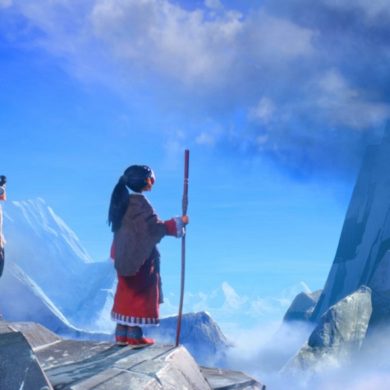 Review: ‘Missing Link’ Is A Delectably Rousing Adventure Only Laika Could Make