Screenland Armour In Kansas City Is Taking Special Steps To Provide Community Based Entertainment, During The Coronavirus Shutdown 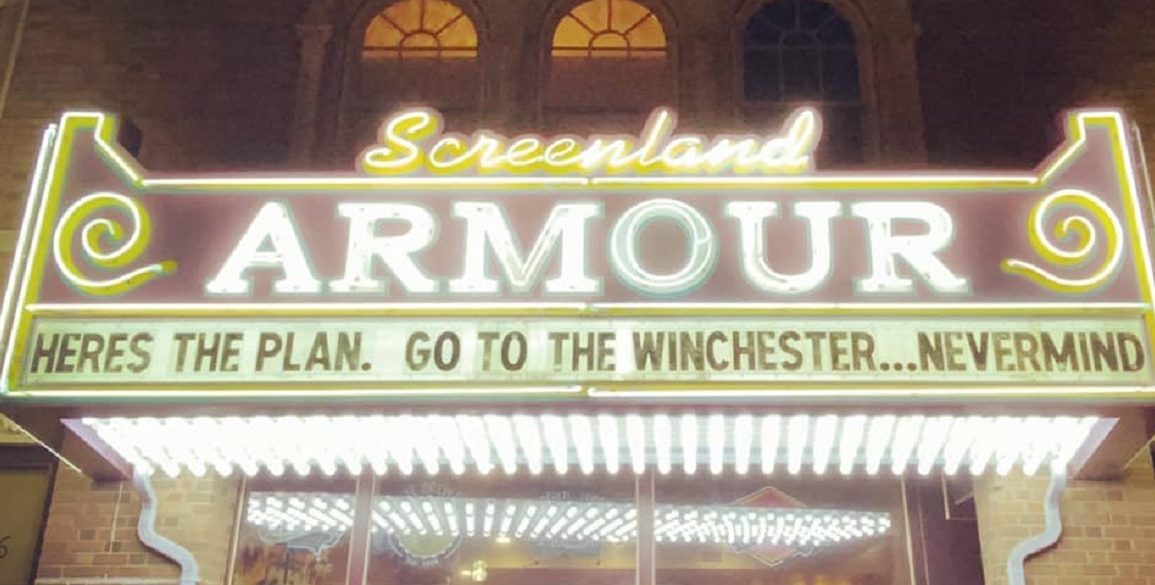 It’s been a weird couple weeks. Movie theaters are closed across the country. Studios are shuffling around release dates, at an alarming rate. At the same time, certain enterprising smaller chains and local theaters are forced to find ways to stay afloat. Attempting to find new ways of generating revenue and bringing entertainment to customers, is a tall order. Being based in Kansas City, we here Boom Howdy have a front row view. What most don’t know, is that KC has the highest number of theaters per capita, in the US. So, we decided to reach out to Adam Roberts, one of the people in charge of Screenland Armour. As one the city’s premier local theaters and home of the Panic Film Festival, we thought it was important to see how he’s comping with the new state of things and what Screenland Armour is doing, to combat the situation.

Boom Howdy: First of all, thanks for taking time to talk to us. How are you currently doing?

Adam Roberts: I’m doing alright even with all the uncertainty. How are you doing?

BH: Holding up as well as expected. I don’t know what day it is, as I often went by release dates, to stay on task. How surreal was it to first learn that theaters were going to shut down?

AR: I’m not sure it felt surreal so much as chaotic. Over the course of three days it went from, “Okay, you’ll have to really be creative with programming to get people in and make your bills”  then it quickly changed to “welp that was a lot of scrambling for nothing. You are closed.”

It happened too quickly to really comprehend what was happening. We were working so quickly, and still are to adapt and try to secure our future as a theater. It truly hasn’t settled in with me yet that there is no upcoming movies because that has been my life even before owning a theater.

BH: So there wasn’t a chance for you you take a moment to react or let it wash over you? Did you just have to dive headfirst into figuring out what came next?

AR: Basically. There was no time to react. I couldn’t let my emotions get the best of me because I had employees that needed answers. That needed direction. Then I have bills that do not stop coming. There is a reason movie theaters never close and it’s because it’s really damn expensive to be one. So, closing for a day hurts… closing for a few weeks, well that could be the death toll.

BH: That’s difficult to imagine! Is this a situation where each week presents a new hurtle? As in when theaters might actually open back up?

AR: There really isn’t a lot of firm direction from Hollywood on when they will confidently release theaters or what the plan is if we are allowed to open next month. As of right now it looks like some studios are looking at August as when they will begin putting out films, however, that all changes if in June the virus is worse.

So, no. They all basically agreed to wait 4 months from now, to decide when to open. A lot of that is they have marketing budgets and major infrastructure to plan for a release. I’m not really sure what the scope of films being release will truly look like as I highly doubt come August 7th that Wonder Woman 84 would be the only film being released. If that is the case what do we do with all the other theaters? Do we all program classics? Independent? It doesn’t add up to how we can be able to really make profits with almost nothing available that first day.

BH: Jumping back in time for a minute, how long have you been involved with Screenland Armour? What made you initially want to run your own movie theater?

AR: This will be my 9th year running a theater. I never sought out to own a theater and I never worked in one before owning one. The opportunity presented itself at a time when I was struggling with my identity as a filmmaker and having a crisis working for big corporations. I took a risk and thought I could offer something unique to our city.

BH: A number of smaller chains & local indie theaters across the country are taking exciting steps to keep entertainment flowing, what is Screenland doing, currently?

AR: Along with these independent theaters, we are digitally programming films for our audience. The struggle is that the films are often much smaller films that we might’ve shown but only on a limited run. Quite simply, we don’t expect to make much off of them especially when much larger chains are sucking customers away from us doing the same type of programming.

But before these options became available to us I was proactive and launched a Patreon where we can continue to curate our film community through watch parties, hangouts, podcasts, trivia and more. For a few bucks a month we are giving our audience a tremendous amount of content that helps them feel connected to the theater.

Both of these (and likely more options) help bring a little bit of money into the business but the keyword there is little. For this to really help or make an impact it would have to be thousands of Patrons supporting us and that’s just unrealistic.

BH: Since the whole world is in this together, the online portal isn’t just set to focus on the greater Kansas City area, correct?

AR: Our programming is open to anyone that likes our theater and wants to support us and stay connected to us.

BH: As you mentioned you started a Screenland Patreon recently. Through that you’re trying to spearhead a number of exciting events, to keep the community active. What do you have coming up in the near future, that people should keep an eye out for?

AR: We are offering a live read once a month with a cast bringing you an unmade or variation of a movie that exists. Our first is the unmade Star Wars Episode 9 Duel of the Fates script!

Other than this we are beginning to work on educational programming and trivia nights.

BH: Have you been in contact with anyone in the entertainment industry, to help continue to build the Screenland community?

AR: Not really. I’ve reached out to people about doing a conversation with them for our Patreon, but many working filmmakers are in the same boat as us. They’re uncertain of where they go from here. Of what happens to the projects they were working on, etc.

BH: How big was it to hear that through the Kino Lorber and Cine partnership, Kino Marquee, they wanted to bring movies to the masses, while helping out a variety of theaters that were struggling?

AR: Actually the Kino Marquee program has been in places for quite some time. The only thing they have added is a partnership with theaters. It’s a great program. As is Magnolia, a much larger distributor, in their ability to spearhead the capability of distributing their films digitally.

BH: Panic Fest, which is held at Screenland Armour (and you’re a co-founder of), has been one of the few film festivals to actually take place, this year. Does that feel weird at all? And what’s your commitment to making sure to keeping it going, in 2021?

AR: We were blessed with where our program falls and the ability to have screened so many terrific films, this last year. We will continue to do so as long as we are able to. The future is uncertain but I don’t think either one of us wants this (Panic Fest) train to slow down.

BH: Easy one here: in a landscape dominated by the B&Bs, AMCs, Landmarks & Regals of the world, what makes local indie theaters so special?

AR: Listen, anytime there are chains of any size big or not so big, they have a major advantage over us, true indie operators. What makes us special is that we don’t have a real chain of command. We can pivot in a blink of an eye. Also, we can truly put our hearts and soul into the four walls that surround our audience. Not just in the curating process, but in the conversations we have with the world around us. We’re the true trailblazers of cinema and each of us is a depiction of what we believe cinema should be.

Whenever I travel I make it a point to stop by a local theater and check it out. To see what they are doing and who they are as an entity.

BH: Since you’re someone who is constantly watching movies, what are a few films you’d suggest to people who are searching for something new?

AR: I made a list of about 30 films that I am focusing on watching. These are films, that for whatever reason, I didn’t see. They range from a Carpenter deep cut like Prince of Darkness to Terrence Mallick’s Badlands. I’m working to catch up on some films I missed and I encourage you to do the same. There is so much out there to binge and the lists are constantly growing but I say go back further. Find films that interested you at one point but you missed.

BH: Lastly, is there any message you want to send to theater lovers? Those who are stuck at home, wondering when they’ll be able to soldier back out to their favorite stomping grounds?

AR: For as long as I can remember the theater going experience has been a holy one for me. Now it’s my livelihood. I’ve had an immeasurable amount of battles as a small business owner over the years but this is the hardest and scariest one yet. It’s made more difficult in that it’s an external force that I could never have prepared for.

The next few months (or longer) will be difficult. Not all of us will make it out and the cinema going experience will be radically changed because of it. This is a time to show your support to the little guys, the trailblazers. We will do our part in every way possible to hopefully be there to reopen when we can. As scared as I may be, I’m hopeful.

For more information on Screenland Armour and how to support them, check their comprehensive site here, their patreon page or screening room page.

SXSW 18: ‘Ali and Cavett’ Is As Charming As Its Subject Matter