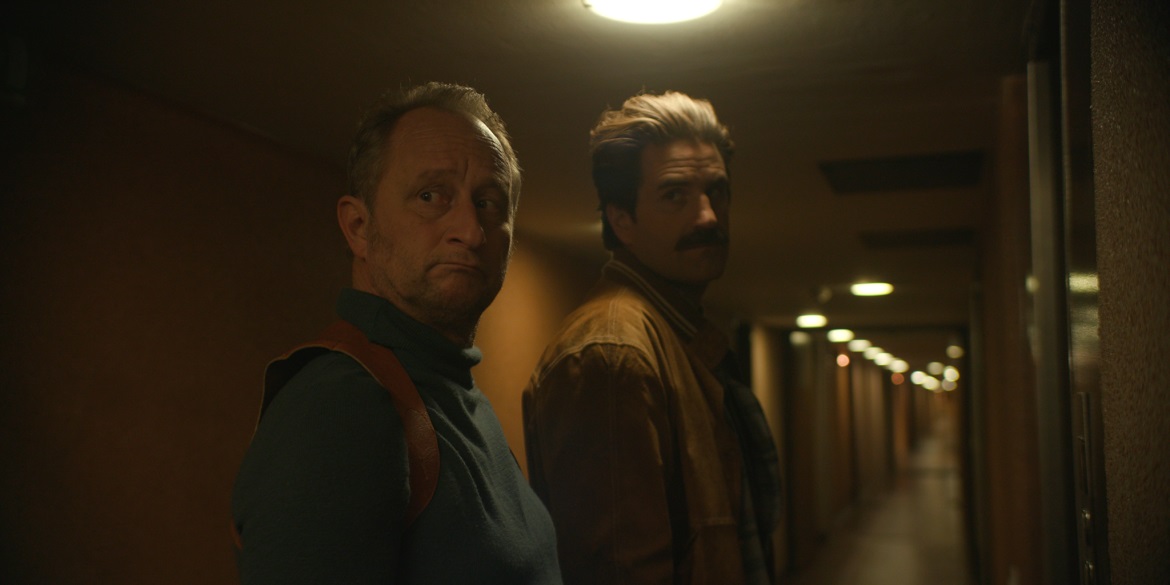 One of the biggest thrills that can come from seeing a movie (besides being with a crowd), is sharing with your friends who weren’t when you’ve seen something special. Every fiber of your being wants to suggest it to everyone. The problem is, when it comes to seeing a movie at a film festival, it’s a toss up when that movie may see the light of day. Sometimes it may be a couple weeks or months. Other times it may be years. As is the case with Quentin Dupieux’s Keep An Eye Out. A film that rounded the festival circuit back in 2018, but is just now coming out. Thank goodness, as this is poised to be one of the hidden gems of 2021.

It’s hard to really delve into the plot of the movie, without falling into wild spoiler territory, but here’s the synopsis:

“Belgian funnyman Benoît Poelvoorde (Man Bites Dog) is Commissaire Buran, a good, bad cop interrogating Fugain (Grégoire Ludig), an average Joe who discovered a dead body outside his apartment building. As the film begins, Fugain must, on an empty stomach, explain how and why he happened to leave home seven times in one night before coming across a corpse in a puddle of blood. Since he’s the investigation’s only suspect, Fugain’s anxiety is already sky-high when Buran leaves him alone with Philippe, a one-eyed rookie cop with bizarre speech patterns and a few minutes to live. Bloody, batshit hijinks ensue, and before long, we’re in Buñuel territory.”

Here’s a “very special trailer”, that’s been tweaked just enough to get you interested:

If you’ve ever witnessed a Dupieux feature before, you kind of know what to expect. From Rubber to Wrong Cops to Deerskin to Reality, no one quiet does wacked out comedies like Dupieux. Keep An Eye Out is very much in the vein of the director’s past works, while also standing on its own. Sure, you can say about that about all his movies. There’s a good chance thought, once you make it to the end of this one, you’ll be gobsmacked. To the point of howling with laugher at the absurdity of it all.

As with any movie set to be released right now, Keep An Eye Out will land in theaters day-and-date with a VOD offering. Basically ensuring that you have no excuse not to view this. For all the yammering on about how solid this is, take a look at our review from when this played Fantastic Fest back in 2018. Need further convincing? At 73 minutes long, it’s about the length of most Disney films. Even flying by twice as fast! Will you possibly be stuck in an existential malaise after the film and unable to do much else with your day? Yes, but in a good way.  Mark your calendars for March 5 or  be prepared to miss out on one of the funniest films of the year.