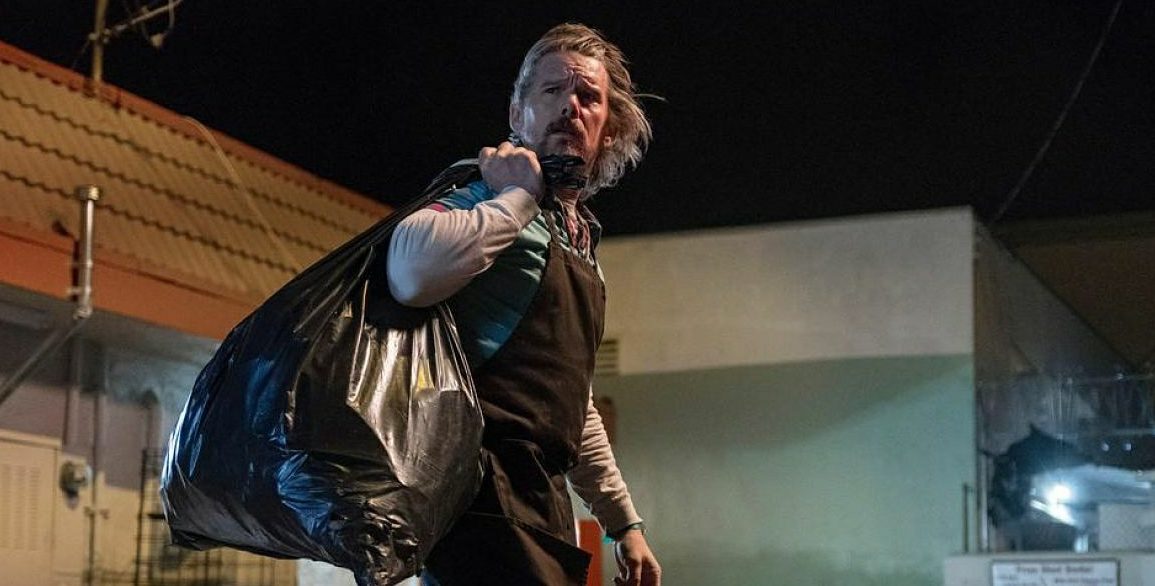 Let’s say you’re the latest Marvel comic series to get the greenlight for the big leagues. The powers that be are eyeing a limited series for you. They’re gone and got one of the most sought after actors, in Oscar Isaac, whose making it a habit of playing unorthodox characters, to play your unorthodox hero. Then they snatched up an unlikely set of directors (Mohamed Diab, Justin Benson & Aaron Moorhead) to handle the majority of episodes. What else are you to do, to get most people excited for your show? How do you send them over the moon? Well, if you’re the team behind Disney+’s Moon Knight, you go and get yourself a villain. In the form of an actor no one would see coming.

In a move that seems perfectly inline for a show quickly picking up steam, The Hollywood Reporter broke the news that Ethan Hawke is joining Moon Knight. That phrase is absolutely wild to read. It’s even wilder to type. Even stranger, is the fact that he’s set to play the series main villain! This isn’t really a piece of news you expect. Although, if you think long about it and cast your mind back to 2008, Marvel’s made a heyday out of calls like this. Truthfully, adding someone like this to the cast, just shows how high Ethan Hawke’s star currently is. And before you don’t think that Hawke can go rough and tumble in a roll, just direct yourself to any number of action filled titles. Not that he needs to necessarily get his hands dirty to be effective, yet in the world of Moon Knight, it’s often encouraged.

As with anytime someone is cast in a Marvel property, everyone’s mind is wondering who exactly Hawke will play. Though a cursory glance might lead you to think there’s 1 logical answer, there’s 3 shoes Hawke could fill. The most obvious is Raoul Bushman, or just Bushman, if keeping it simple. A mercenary who tattooed his skull white to strike fear in enemies, he’s also Moon Knights oldest foes. Partially because when he betrayed Marc Spector and left him for dead in the Egypt desert, he “technically” created the masked vigilante.

While Bushman is woven into most narratives with the character, so is Randall Spector. As the name indicates, he’s Marc’s brother. At one point Randall been proven his brother’s equal, just with an evil demeanor. He’s even gone by the moniker Shadow Knight, before. That may seem a tad on-the-nose, but that’s comics for you. Lastly, there’s Carson Knowles, aka The Black Spectre, who has found himself going up against Moon Knight many times. All of the options pose a serious threat for Moon Knight. Either preying upon his mercenary past, his familial bond or what it is exactly that makes him a hero. All of which make for compelling storylines.

Whomever Ethan Hawke is playing, it’ll just be icing on the cake of what’s shaping up to be the most hotly anticipated Marvel series. Yes, there’s a handful of other shows coming down the pike. None of them have such a weird cloud hanging over things. That’s a good thing. Moon Knight is such a strange and dark character, there’s a multitude of ways a show focusing on him can go. Once it’s officially revealed who the main villain is, there’ll be a clearer sense of where the show is going. The plus being that there really isn’t a bad answer. With the talent that’s already assembled, you best just subscribe for Disney+ now, so you don’t forget later. Currently Moon Knight is set to start filling in March, in Budapest.