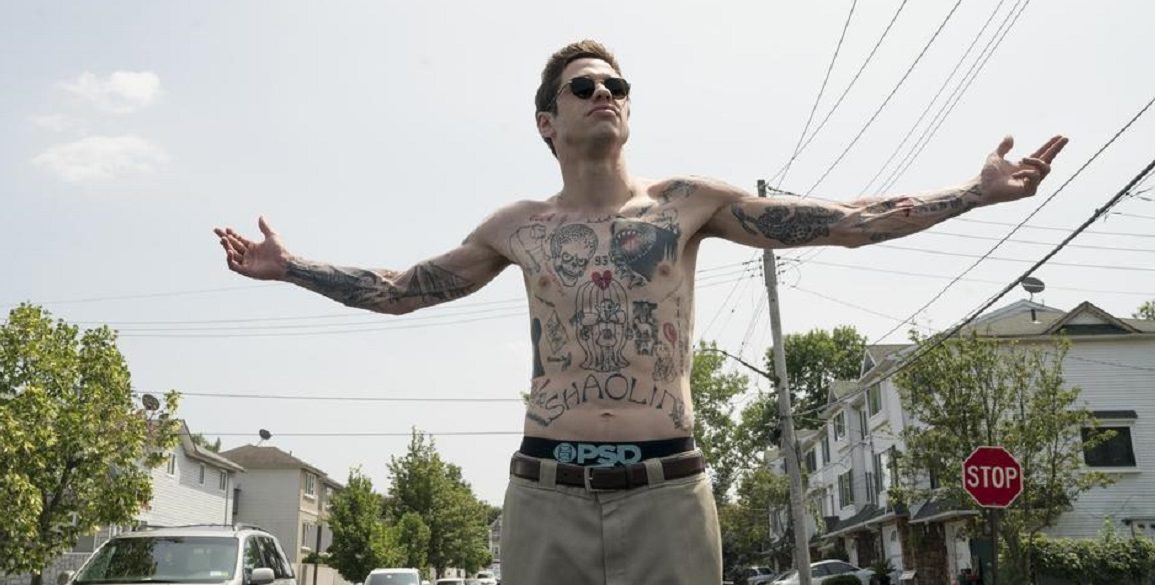 Last week we brought you a fun little video. In this time of people still be stuck at home Netflix saw an opportunity to announce The Lovebirds premiering on their platform, with the help of Issa Rae & Kumail Nanjiani. It was cute, it was funny, but most importantly, it was short. Now, Judd Apatow’s and Pete Davidson are doing the same thing for The King of Staten Island. Only their versions is overlong, at just under 4 minutes (as is Apatow’s normal M.O.). Nor is their film being packaged with a larger streaming subscription package.

Here’s the official synopsis for the film, which is strangely left out of the post:

“Scott (Davidson) has been a case of arrested development ever since his firefighter father died when he was seven. He’s now reached his mid-20s having achieved little, chasing a dream of becoming a tattoo artist that seems far out of reach. As his ambitious younger sister (Maude Apatow, HBO’s Euphoria) heads off to college, Scott is still living with his exhausted ER nurse mother (Oscar® winner Marisa Tomei) and spends his days smoking weed, hanging with the guys—Oscar (Ricky Velez, ), Igor (Moises Arias) and Richie (Lou Wilson)—and secretly hooking up with his childhood friend Kelsey (Bel Powley). But when his mother starts dating a loudmouth firefighter named Ray (Bill Burr), it sets off a chain of events that will force Scott to grapple with his grief and take his first tentative steps toward moving forward in life.”

As per the content of that video, we now know The King of Staten Island will be available on VOD everywhere, starting June 12. More over, there’s a couple important takeaways, from the above. 1) Apatow convinced Davidson he could get an Oscar for his role (maybe). 2) Bacon or the consumption of bacon plays a roll in the film. 3) there will be lots of drug jokes in the film.Or there’s a chance none of that is true and the two just thought it was funny, Either way, there’s a bit of confusion over what tone the film is. With Davidson and Apatow involved, there’s a chance this is close to Funny People territory. At the same time, this could be one heck of an emotional, but funny, gut-punch. It’s hard to say where it falls right now, as there isn’t even so much as a trailer out there.

The move to put The King of Staten Island onto VOD makes it the high profile festival film to go this route. Originally, Universal had slated the film to premiere at SXSW. If that sounds strange at all, it isn’t. The studio has tested the audience market there recently, with the likes of Good Boys and Blockers. Admittedly, the difference here is the last couple festival films, to get picked up, ended up on subscription services. Dropping this film on to the general streaming market is a bit of a gamble. However, that may get it to potentially more eyeballs overall, than going the normal route. On the other hand, it entirely depends on how much it costs to rent.

What’s interesting about all this, is the release date. Originally, the movie was set to open on June 19. Now, it gets moved up a week, to June 12. With so many theaters wanting to wait till around July to reopen, this seems odd. Unless, the studio is skittish on what type of box office performance the film could have. After all, Davidson wants that Oscar nod or joking bragging rights, at the very least. That doesn’t come cheap. The big question is, are you, dear readers, interested in seeing The King of Staten Island? How much are you willing to pay for it? Use the space in the comments, to let us know. For now we’ll keep our eyes peeled on if there’s a chance to review this one, early for you. Until then, here’s the official poster for the film.