If You Watch Only One “Bruce Willis In A Battle Suit” Trailer This Week, Make It The Trailer For ‘Cosmic Sin’ 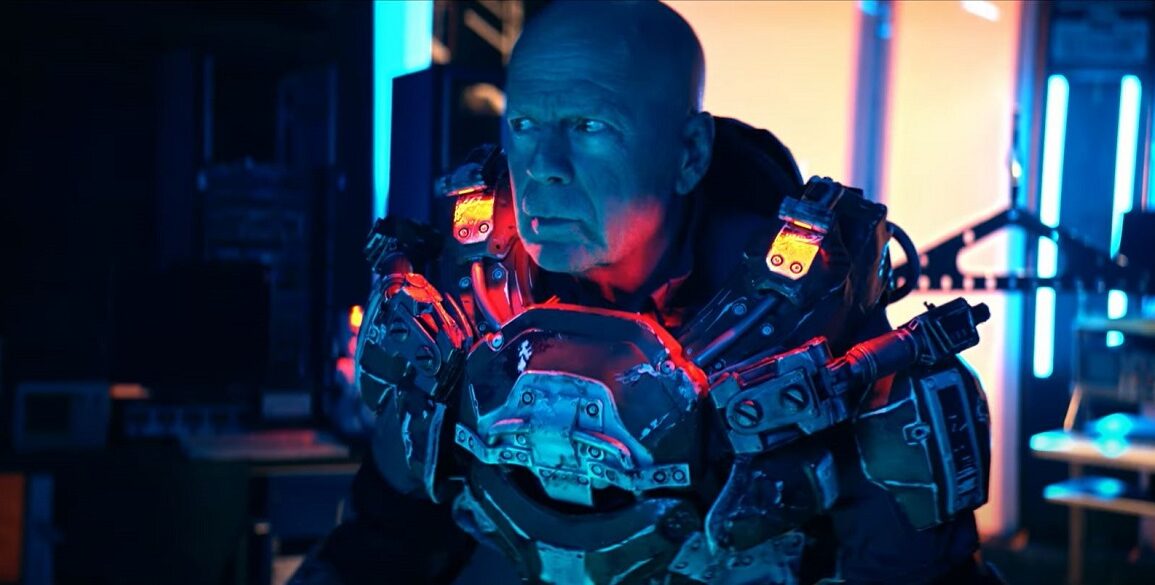 In the pantheon of actors who make 5000 VOD movies a year, Bruce Willis sometimes forgets to get mentioned. Part of that is because of the number of theatrical films he pops up in, from time to time. The other element is, that compared to other VOD stars, Willis output is rather hit and miss. At a ratio that makes Nicolas Cage seem like he’s constantly winning the lottery. Yet, every so often one of those titles makes you raise your head a bit. Plus and eyebrow. As well as your shoulders. Today that film is Cosmic Sin, which just to has a trailer you should watch immediately. Not just because it has Frank Grillo.

While you take a moment and process exactly what you’ve just witnessed, here’s the official synopsis:

“In the year 2524, four hundred years after humans started colonizing the outer planets. Retired Military General James Ford (Willis) is called back into service after soldiers on a remote planet are attacked by a hostile alien fleet. The threat against the human race escalates into an inevitable interstellar war. General Ford teams up with General Eron Ryle (Grillo) and a team of elite soldiers in a race to stop the imminent attack before it is too late.”

There’s a lot to be said about the trailer for Cosmic Sin that feels almost too easy. The battle suits that feel somewhere between Elysium and Halo, but half the cost. Grillo doubling the energy of Willis. The “bad guys” who are rather hard to make out (one of them wears a robe?). Though, past all that joking there’s a sense of fun that comes from this. Call it getting past 2020 and being down for everything, but Cosmic Sin looks as if it will scratch a rather particular itch (something Deep Blue Sea 3 accomplished last year for many). Is it going to win all the awards? Probably not. Will it be an entertaining romp? The jury’s going to be out for a bit, yet there’s a good chance. That’s all you can ask for sometimes.

Outside of the involvement of Willis and Grillo, the film has a number of other familiar faces. Lochlyn Munro, Adelaide Kane, C.J. Perry, Costas Mandylor and…Luke Wilson? That can’t be right. According to news from last March (and iMDB & Wikipedia), Wilson is a part of the film. His name doesn’t appear anywhere at the end of the trailer though. It’s just one mystery that can only be solved by checking out Cosmic Sin, directed by Edward Drake, when it lands in theaters, VOD and digital, starting March 12, 2021.

Watch the Trailer Debut for Osgood Perkins’ “The Blackcoat’s Daughter”