Film festivals are great. Not only is it a great way for big genre films to build good word of mouth, but the international and indie offerings are often as good as the bigger name films. Occasionally though, some of the most celebrated films screened at those events, don’t get a release until months, if not years, after their premieres. The rise of streaming services and a gaggle of independent distributors have helped make that wait somewhat shorter. That’s the case with the upcoming Five Fingers For Marseilles.

After showing at last year’s Tiff, Fantastic Fest and Fantasia, things went quiet on the film. Then, just a couple weeks back, word came out that Uncork’d Entertainment was planning a theatrical run, starting in September. That’s right around the corner! Here’s the official synopsis, for those interested:

From filmmaker Michael Matthews and screenwriter Sean Drummond comes a thrilling western set against the backdrop of post-Apartheid South Africa. Five Fingers for Marseilles takes place in a small town “governed” by dubious local officials, living in fear of a lawless mob; when an exiled outlaw returns home in search of solace and redemption, brotherhood and loyalty are fused with vengeance.

For those at home, on lunch or work for a place that doesn’t care about slightly NSFW content, take a gander at the Red Band trailer below.

That certainly looks like it lives up to the hype. Some may be turned off by the stylized dialogue and if a different kind of movie, I could get there. It seems to match Five Fingers revisionist western tone. Care and measure are important when it comes to tackling a revisionist western and director Michael Matthews really appears tuned into that wavelength here.

Of course the part that stands out the most in that trailer is the 100% Rotten Tomatoes rating. Yes, some people may call into question the validity of such “fresh” rankings. In this case, I have it on good authority this film is very good.  Mostly because people told me this at Fantastic Fest year. We’ll even have our own review of Five Fingers up soon enough. Keep your eyes out for more info as this film hits select cities starting on September 7th. 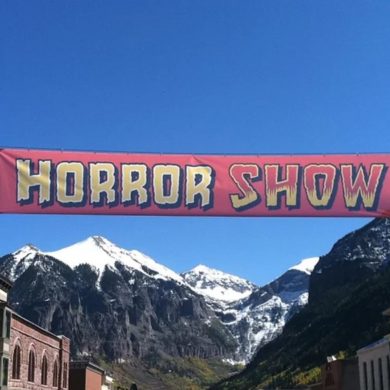