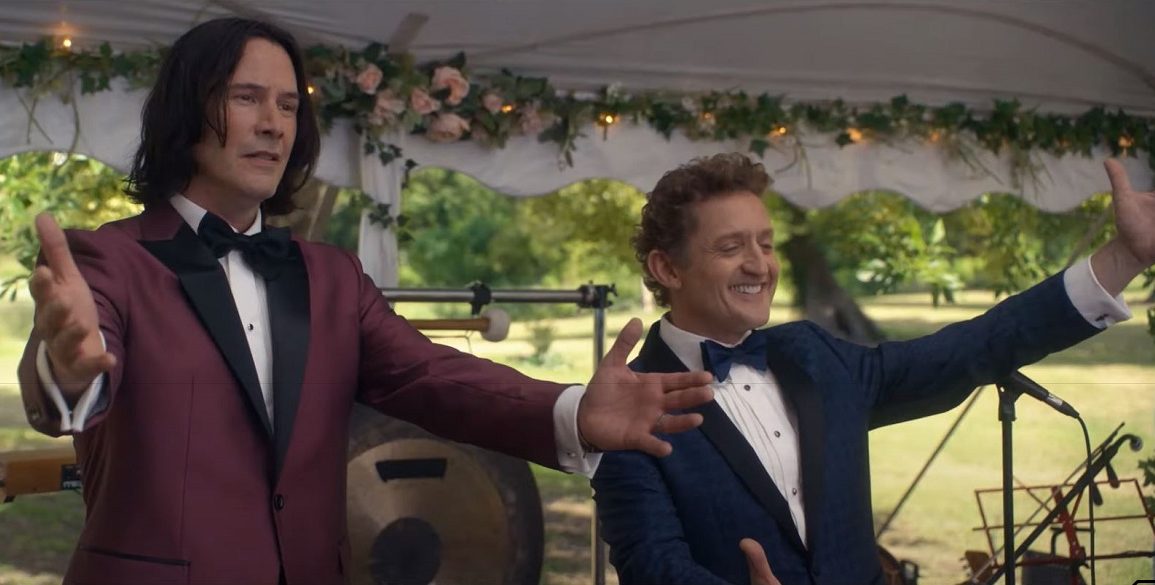 Whoa! Today truly is an excellent day. After years of promises, rumors, false starts, scheduling conflicts, etc, we have 10000% percent definitive proof that the third Bill & Ted movie does indeed exist. For a long time this seemed like a “we’ll believe it when we see it type situation”. Now that an official trailer has graced the world, we’re a little shocked. Bill & Ted Face The Music is here to melt your face and soothe your soul. See for yourself, below.

You’d think Bill & Ted wouldn’t be dorkwads and have a full plot synopsis, but here we are:

“The stakes are higher than ever for the time-traveling exploits of William “Bill” S. Preston Esq. and Theodore “Ted” Logan. Yet to fulfill their rock and roll destiny, the now middle aged best friends set out on a new adventure when a visitor from the future warns them that only their song can save life as we know it. Along the way, they will be helped by their daughters, a new batch of historical figures, and a few music legends – to seek the song that will set their world right and bring harmony in the universe.”

Yeah. A lot to unpack here. Beyond the initial shock that this isn’t a joke and the nostalgia that follows. There’s a simple joy in seeing Alex Winter and Keanu Reeves slip so naturally back into their iconic roles. It helps that the story (from original scribes Ed Solomon & Chris Matheson) appears lite enough, as to not betray the spirit of the characters. 25 years after we last saw Bill & Ted they haven’t quite lived up to the savior status they were destined for. Without a song to bring humanity together, the future is in danger. From there it looks like there will be a most excellent trip across time, to save the day. One filled with ripped prison versions of themselves, as well as a return by death himself! Plus the strange (and kind of great) addition of Dean Parisot (Galaxy Quest) in the director’s chair. What’s not to love about that?

Of course, there’s a lot that’s being kept close to the chest, here. You don’t spend decades promising a sequel and then letting all the secrets out at once. No. That would be totally heinous. The glimpses we get of Bill & Ted Face The Music is enough to get fans excited. From that perspective, they’ve succeeded most execllent-ly. Now, we all have to cross our fingers, in hopes that the film can make its August 21 release date. While we await new that all is safe, why not check out this new poster for the film & contemplate taking a trip to the nearest Circle K.